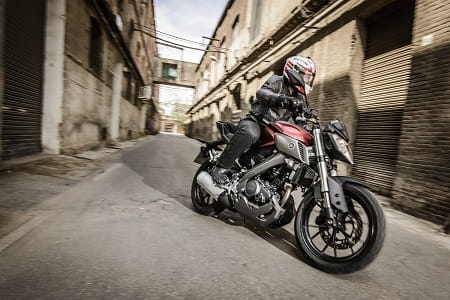 Yamaha’s new MT-125 takes the style of its bigger MT-07 and MT-09 brothers along with the chassis and engine of the YZF-R125 to create one of the best 125s yet. But don’t be fooled, it’s way more than a bitsa and is yet another arrow in Yamaha’s bow as it makes a comeback with a whole host of exciting new models.

Its two elder brothers, MT-07 and MT-09 have both won many plaudits during their short lives, particularly with their new and quite epic 2 and 3-cylinder engines respectively. The smaller version is a single-cylinder 4-stroke and it’s good, as our test at the world press launch in Barcelona proves.

The MT story is a long one that started with the 1670cc MT-01 in 2005, followed by the 660cc single-cylinder MT-03 in 2006. Neither of them took off in a big way in the UK, and it’s fair to say the MT-01 bombed. But that all changed last year when Yamaha announced the MT-07 and MT-09. Both are arguably the best bikes in their class and finally add weight to the MT name.

First came the MT-09 in September 2013 followed by its baby brother, the 07 earlier this year. Then, last month, the Japanese firm announced their intention of producing this A1-licence friendly, 14.6bhp (11kW) MT-125.

The MT-125 shares many components with the YZF-R125, with one big difference.has a shorter and more upright fuel tank which, with an 11.5 litre capacity. Okay, so it squeezes in 2.3 litres less unleaded than its sportier cousin, but it does offer more grown-up looks as well as a degree of street 'cool'. It’s a style which will attract the young or new-to-biking post-CBT / A1 licence holders who have ambitions of one day riding one of the new batch of super-nakeds be it an MT-09, an S1000R, a Z800, a 1200 Monster, or a KTM Super Duke. 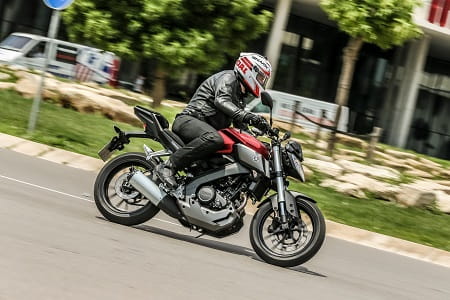 Naked sports bikes aren't traditionally the best looking things on two wheels. There's no sleek fairing to hide all of those engine components, but in the ever-popular world of 125cc machines there can't be many lower capacity bikes more attractive than the MT-125.

Despite this, Yamaha have deliberately chosen to focus their marketing of this bike on the night time, 'Don't be afraid of the dark' it states. And why would you when you're equipped with such a good-looking, angular and sharp machine, especially with LED daylights?

Clearly the genetics in Yamaha's new MT generation have made it through the family tree down to the 125 so if you've just passed your CBT or you're planning your first A1 friendly machine then you'd be wise to spend some of your earnings on this. At close to £4000 it’s expensive when it goes on sale in August, but definitely worth further investigation.

Over the course of the Yamaha launch in Barcelona, we covered around 60 miles of the city's traffic-light laden streets as well as a trip up and down some twisty roads above the city. The roads were packed with fast-flowing and hairpin bends of varying degrees of incline and decline.

Ultimately, if you’re used to riding bigger bikes, you’ll miss horsepower, but as 125s go, and given the choice of any bike to complete the same route on again, there's not many which could offer a wider grin in return. It goes, stops and handles like a sports bike defying its naked bike looks.

In theory the bike has the same rear suspension as the YZF-R125, but with the shift in weight distribution thanks to the riders' more upright seating position and the taller yet smaller fuel tank It actually makes the bike feel more rigid at the back. This is a good thing, and Yamaha also say that the MT is the more likely of the two bikes to be ridden with a pillion.

This bike has all of the right stuff. It's got the Yamaha badge for one - offering high quality from a technical and R&D perspective - as well as a 'punchy' 11kW (14.8bhp) learner friendly motor which takes no encouragement to rev high. 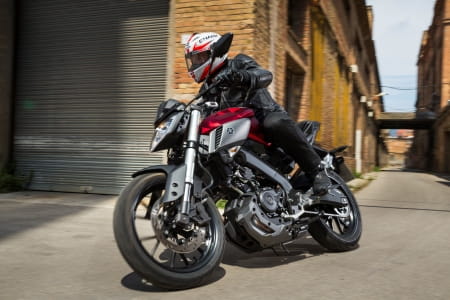 The 6-speed gearbox has a proper mechanical feel while being sharp and responsive and will take you over 80mph. Just like the R125, the clutch lever is almost fully open before you move anywhere.

The throttle is precise; the exhaust note tells you exactly what you're up too without being too flimsy (it is a 125 after all). Sporty is one thing, practical is another and there’s already a range of official accessories for the MT-125 including an Akrapovic exhaust, a 39 litre top box and a tank bag, along with a host of other accessories. 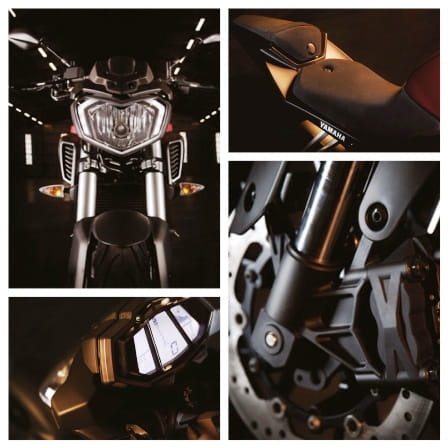 Unsurprisingly, the MT world, or 'community' as Yamaha would like us to call it, is growing. This fuels Yamaha's MT Tour which stops off at a variety of events and dealerships country-wide. Just check the website for the latest dates and venues.

As city and commuting traffic increases, public transport becomes more expensive yet more unreliable, there's no wonder the 50-125cc category is thriving so in this highly competitive sector.

If you're a welcome new addition to motorcycling, down-sizing from a bigger bike, or advancing from CBT obscurity then you'll have a tough job finding a more enjoyable, easy-to-ride albeit rewarding bike than Yamaha's 'Mini MT.' 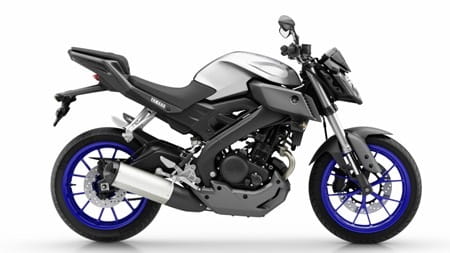