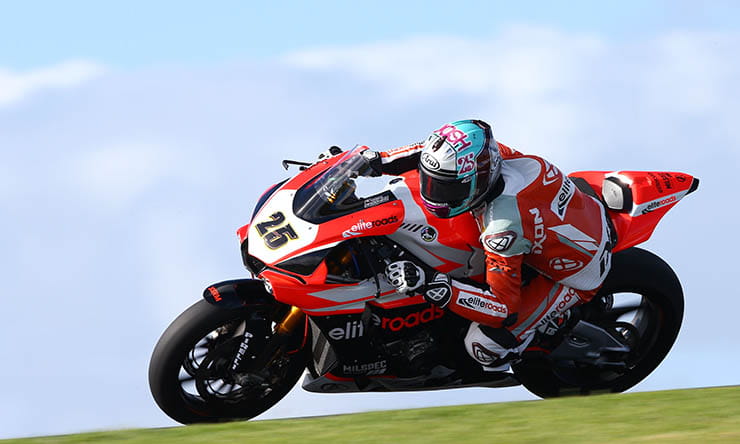 Sixteen months ago, Josh Brookes was on top of the world. After years of trying, the Australian bad boy had finally won the British Superbike Championship and was on the verge of signing a deal to race for the Milwaukee BMW squad.

Fast forward to today, and he finds himself preparing for his debut as a team boss, running himself as a wild-card in this weekend’s world superbike round at Phillip Island, Australia, before he jets back to the UK ahead of a return to the British Superbike Championship and another crack at the Isle of Man TT, where he has surprisingly joined forces with Norton.

When we spoke to Brookes, it was around midnight and he’s en route to Melbourne to work on the bike prior to this week’s world superbike test at Philip Island, where he set the 17th fastest time out of the 21 riders. The man really doesn’t stop.

The 33-year-old Sydneysider has entered the first round of the World Superbike Championship at Phillip Island with a machine he has prepared himself and with a team he and his partner Aimee are creating, managing and coordinating themselves.

“A friend, who’s also a sponsor, bought the 2015 Yamaha R1 I won the BSB championship on, so I’m prepping that myself and adapting it to meet world superbike spec. He’s got his own business and a family so he can’t be too involved with getting the bike ready so I’m doing instead.”

But that's not all.

“I’m trying to do everything, including organising the team shirts, ordering parts - everything you can think of.”

His new role as team manager, paint work chief, mechanic, engineer, secretary and PR man has taken Brookes back to his roots.

“It’s actually been really good - this whole thing has that satisfying element to it and it reminds me of when I started out. I'm sleeping less and working more but there are only 24 hours in a day. And that’s the same for everybody. But for all the time and effort I put in, I get something out, and that’s a great thing.”

“It’s like being a gardener,” he says, philosophically. “Once you’ve made all the planting beds perfect and you stand back and and look at what you’ve done. That pride in our work is what it’s all about.”

And if that weren’t enough. After a disappointing 2016 campaign in which he struggled to gel with the BMW S1000RR in world superbikes, Brookes has also signed up with the unfancied Anvil Hire TAG Yamaha team in British superbikes, as well as joining fellow Aussie rider Dave Johnson on the increasingly competitive Norton at the Isle of Man TT.

“Norton is such an historic brand and it has such a cult following,” said Josh. “I’m really pleased about racing on the Isle of Man with them. I know that I’m just a speck of sand on a beach in its history but it’s still good to be part of that history nonetheless.”

“They have taken a step forward with the bike this year and Dave’s bike was faster than the Yamaha I was on the year before. The bike is more than capable of reaching those top speeds but I am still in the learning phase.”

“The 2014 TT was trickier because it was a very difficult bike to ride but now I consider myself a proper TT rider, which is about right because people say that it takes three years to be fully comfortable racing at the TT. “

But the mental preparation for the TT is in a different league to that required of a short circuit race.

“At the TT there are so many variables, the weather conditions matter so much more and you’re also looking at how much the trees have grown since you were last there, what the surface is like - all these issues come into play, and then you’ve got the corners to remember on top of that.”

And this, he says, it what separates the TT from a typical short circuit.

“When you’re racing on short circuits you’re purely testing the sheer limits of your machine. You’re testing the maximum grip before you crash, the maximum lean without falling off and the braking points. The safety elements of a purpose-built short circuit allow this, so your brain is focused just on going as fast as possible. But at the TT the amount of concentration is unbelievable because you’re thinking about all this other stuff while trying to recall data from your short terms memory as to what corner is next at the same time. And going fast!

And with so many miles of circuit - 37 and three quarter to be precise - Brookes is fully aware that he has certain section he needs to brush up on.

“The section from Ginger Hall to Ramsey is particularly difficult,” he says. “It’s very bumpy but it’s also an area of the track where I have never felt at ease.”

The first 10 miles of the course, however, is another matter for Brookes. “I think the start to Glen Helen is my favourite section. Your brain is fresh at that stage and has much more data to hand,” he says.

Brookes is clearly deeply excited about the TT. “I wasn’t sure if it was just me thinking this but it feels like this year’s got a real buzz about it. The event is growing and growing so it’s getting better and better.

But that’s just the TT, Brookes has also got his wild card this weekend and British superbikes to think about first - not to mention the team t shirts, the tyres, the truck…

The 2017 Superbike World Championship kicks off at Phillip Island this weekend. Superpole and race one takes place on Saturday, with race two and the Supersport World Championship round on Sunday. You can watch all the action live through the night on British Eurosport 2, or by purchasing a video pass at the WorldSBK website. You can also read our season preview here.