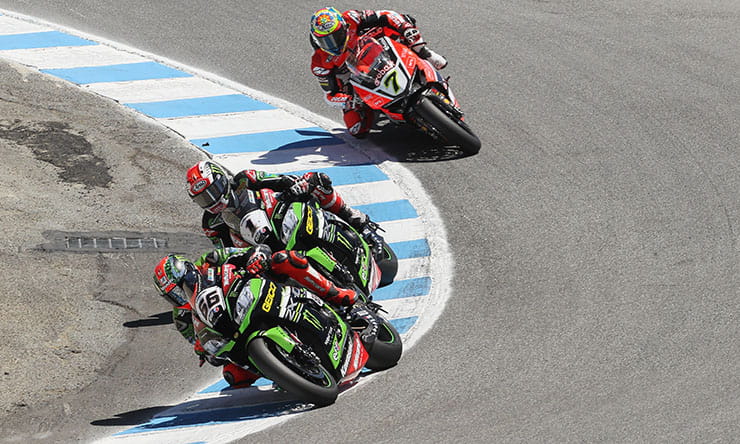 The Superbike World Championship travelled Stateside this weekend, with the ninth round of the series taking place at the iconic Laguna Seca circuit in California.

In a race that was littered with errors and mishaps for most riders, Rea himself even conceded it as “not my most beautiful race.” One such mistake saw the Ulsterman lose so much time he conceded the lead to Sykes. Rea managed to recover his composure and caught Sykes, passing him with six laps to go and from there, he eased to victory. The two riders showed massive trust and respect in each other as they race hard late in the race, Sykes chasing his team mate to the flag but finishing +0.819s adrift when the chequered flag came out after 25 laps.

Not everybody had the same level of good fortune, the Aruba.it Ducati team had a torrid afternoon with Chaz Davies gifting the lead to Rea on lap four, crashing out of the lead as he lost the front at the fast turn six, while team mate Davide Giugliano crashed on the exit of the corkscrew.

The falls and run offs did give the home fans something to cheer about, fan favourite and all round US bike racing legend Nicky Hayden made a move up to take third and the final rostrum slot. If the ‘Kentucky Kid’ expected an easy ride to the podium from his team mate Michael van der Mark he was sorely mistaken. The 23-year-old chased Hayden hard and even made an ambitious lunge at the final corner. The faces in the Ten Kate Honda garage looked on in anguish as Hayden held on and brought the Honda duo home, some 18 seconds adrift of the leading pair.

Another noteworthy performance was that of Alex Lowes on the PATA Yamaha, as he scored a fifth placed finish, tantalisingly close to the battling Hondas in front. 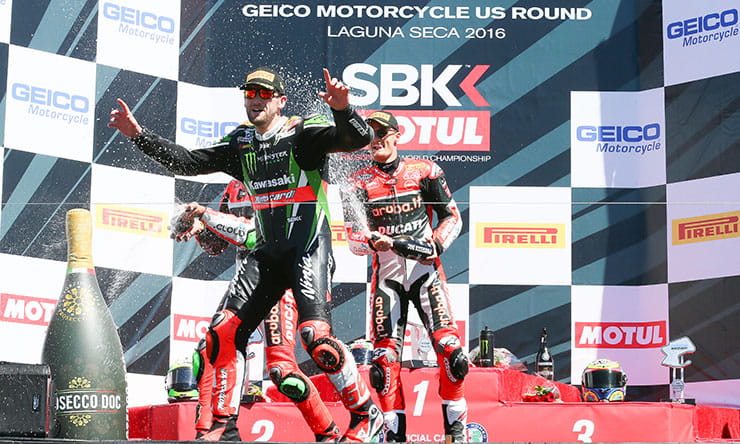 The original running of Sunday’s race was stopped following a nasty crash involving Polish rider Pawal Szkopek. In the restart, Sykes took a healthy bite out of Rea’s lead after the champion’s ZX-10R suffered a rare technical problem while battling for the lead. After running wide through turn seven while leading, it became apparent there was a terminal issue with the Kawasaki. Speaking afterwards, Rea commented: “We need to analyse everything with the bike. When I went wide in turn seven I rejoined the track and it seemed I had a problem. As soon as I closed the gas the rear was locking and I heard some noise. I carried on through some corners, arrived in turn one and it was really locking a lot. Then in turn two something was wrong so I pulled in.”

The retirement ended Rea’s 100% podium record this season and left team-mate Sykes to uphold Kawasaki honour against the hard-charging Ducatis of Davies and Giugliano. You have to wonder if, had they not been squabbling among themselves, they would have been able to pressure Sykes for the win. They did keep the pressure on right until the last lap and the three riders eventually crossed the line covered by less than a second. Xavi Fores was best of rest bringing the Barni Ducati 1199R home in fourth place, chased hard by Hayden, Jordi Torres and Van der Mark.

Behind them, Lowes was involved in a bizarre last corner incident with stand in team mate Niccolo Canepa. The Brit lost the front as he charged through to try and take eighth. Lowes sliding down the road before remounting to take 14th, while the Italian acrobatically stayed onboard his YZF-R1 to maintain his position. Fellow Brit Leon Camier finished ninth in race one but retired with a mechanical problem in race two.

In the championship, Sykes' win sees him reduce the deficit to his team mate from 71 points going into the American round, to 46.