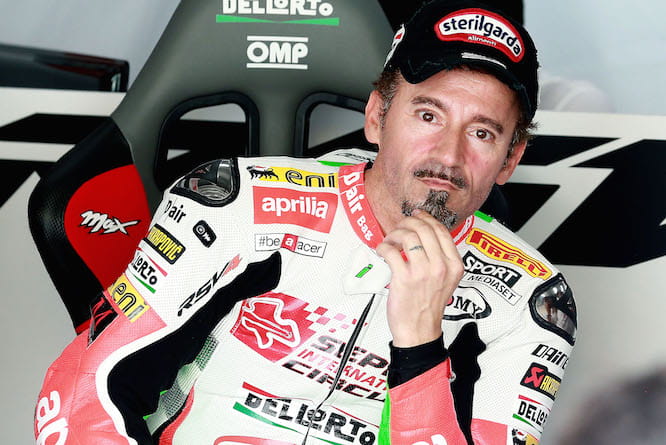 Max Biaggi could miss out on what could be his final comeback to the World Superbike Championship in Qatar.

The 44 year old tweeted this morning to say his race weekend was in doubt after falling from his mountain bike during a training session.

The former Superbike and 250cc GP World Champion was set to make his third comeback wildcard of the season this weekend in Qatar, after two successful wildcards in Misano and Sepang.

It was thought the appearance could be his last ever in the series with Aprilia planning to scale down their superbike involvement next season.

“Unfortunately yesterday due to a fall in training on a mountain bike we are in doubt for Qatar race,” explained the Italian.

Despite being the oldest rider on the grid by some margin, Biaggi impressed in his earlier wildcards, which included a welcome return to the podium in Sepang. He had previously said he was looking forward to racing under the floodlights in Qatar as it’s something he’s never done before.

Bike Social understands Biaggi was planning to see how things go in the next four days, before undergoing a fitness test ahead of Friday's first practice session, however the Italian has since ruled himself out of any participation.