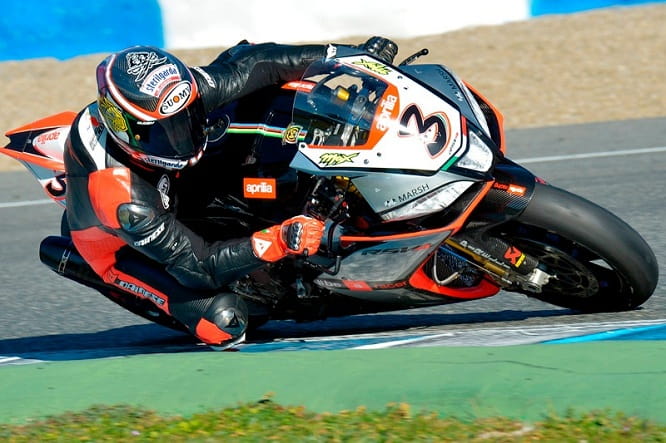 Max Biaggi has denied rumours he is set to make a return to racing this season.

The two-time World Superbike Champion retired from competition at the end of the 2012 but test appearances for both Aprilia and Ducati in recent years has given rise to numerous rumours of wildcard appearances.

The most recent of these came just last week when Red Devils Aprilia boss told German website, Speedweek.de that there was a ‘possibility’ Biaggi would compete as a wildcard in select rounds of this year’s Superbike World Championship.

“I am sorry to say but I am not doing any wildcards,” said Biaggi speaking to WorldSBK.com. “I’m making a lot of laps in testing for Aprilia, this is my second test and the third one will be soon. I am a test rider now and I want to put in as many laps as possible while evaluating new components and settings for both MotoGP and World Superbike.”

Biaggi was testing with the Aprilia factory in Jerez aboard what looked to be a Superbike specification RSV4. However it is believed the Roman was testing MotoGP electronics on the production machine.

“It’s really fun to be back on this kind of bike after three long years, my last time was 2013. I am honoured to be back on the road and helping these guys to develop this bike between SBK and MotoGP.”

The 43-year-old was some two seconds off the pace set by his former World Superbike rivals in the test, showing there’d be work to do if he ever did come back but he’s confident he’d be on the pace after enough laps on the bike.

“It’s been a long time. I need to adapt myself again but it’s nice. When you come back after such a long time you realise it is better if you don’t stop at all, but I made my decision. Now I’m back on the road if I can make enough laps in testing, I think I can be back on the pace. These guys are going very fast.”