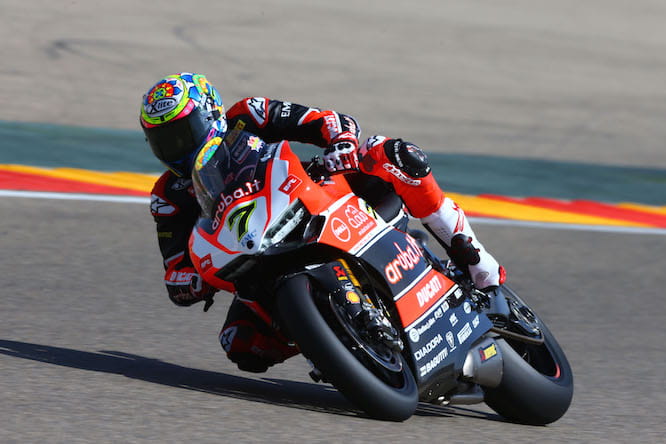 Chaz Davies has taken Ducati’s first win in the Superbike World Championship in three years with a dominant lights-to-flag victory in race two at Aragon. The Welshman finished second in the day’s first race behind Kawasaki’s Jonathan Rea.

Tom Sykes grabs the advantage in to the first turn ahead of polesitter Leon Haslam. Welshman Davies slid up the inside of the Aprilia to take second early on with the Derbyshire man then losing out again to the second Kawasaki of Jonathan Rea.

With Sykes pulling away at the front, Jonathan Rea made a move on Davies to take second with 11 laps remaining.

It was a bad day for Suzuki’s Alex Lowes, whose bike experienced technical difficulties from the word go in race one. The Voltcom Crescent Suzuki team have switched from Motec to Magnetti Marelli ECU this weekend and are experiencing a few teething difficulties.

Rea latched on to the back of his teammate but Sykes’ ability to brake as late as possible held the Ulsterman of for three laps. In the end, Rea had to make a lunge with six to go to pass the Yorkshireman. Davies started to eye up Sykes as Rea began to pull away. Davies pushed his way through on Sykes into the downhill chicane, holding the Kawasaki off on the brakes at the end of the long straight.

Davies looked in a strong position to challenge Rea and take Ducati’s first victory in three years on the final lap, trying once again down the last downhill chicane and holding the lead into the final turn before running slightly wide to lose out to the once again unbeatable Kawasaki. 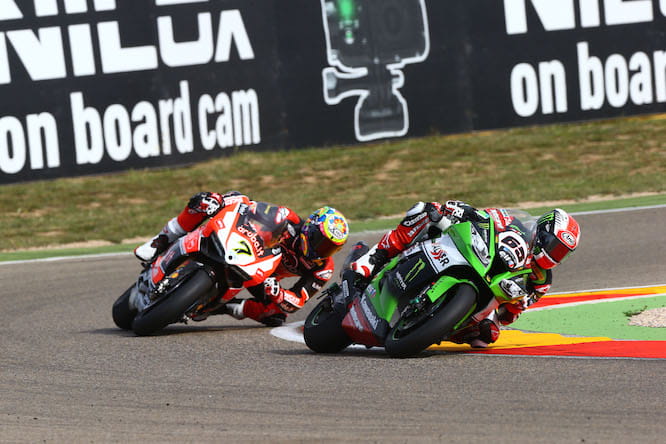 Sykes took a solid third ahead of the Aprilias of Haslam and Torres. Xavier Fores took fifth filling in for Davide Giugliano ahead of Nico Terol, Leandro Mercado and Sylvain Guintoli with an impressive result for Leon Camier in tenth.

Chaz Davies took the holeshot in the second race ahead of Jonathan Rea and Leon Haslam.

Tom Sykes highsided out of third place on lap five to continue a difficult start to the season for the 2013 World Champion. Sylvain Guintoli was another world champion to fall just a lap later.

By lap eight, Davies had extended his lead to 2.5 seconds, with Haslam closing in on Rea for second.

Hammering in the laps, Davies built his gap to around four seconds before crossing the line to take Ducati’s first win since Carlos Checa on the 1198 at Miller Motorsports Park in 2010.

Rea managed to keep second from Haslam in third, a trio of Spaniards taking fourth, fifth and sixth in the shape of Jordi Torres, Xavi Fores and David Salom.

Leandro Mercado took his best finish of the season in seventh ahead of Michael van der Mark and Ayrton Badovini, who has replaced Sylvain Barrier at BMW Italia. Nicolas Terol rounded out the top ten.