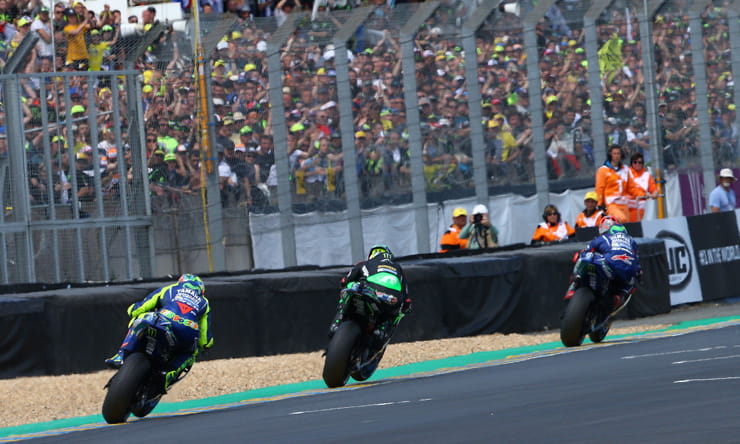 Today’s MotoGP race at Le Mans took place in perfect conditions with nearly 105,000 fans in attendance, many of them hoping that front row starter Johan Zarco would put on a show for them. They were not disappointed!

The early part of the race was dominated by Johan Zarco for Tech3 Yamaha who managed his tyres extremely well to stay out front until lap seven when Maverick Vinalês on the Movistar Yamaha forced his way through at turn three. Zarco held on until turn three was again the point that he would lose out, this time Valentino Rossi passed him to chase down Vinalês who was just beginning to break away.

Marc Marquez had a race to forget after the Repsol Honda rider crashed out of fourth place with 11 laps to go. Marquez (pictured below, main) had been putting in personal best lap times just prior to the crash and was lucky not to end up hitting the wall on the outside of turn two. The Spaniard was unable to restart his bike and coasted into the pits and retirement from the race.

Championship leader coming into the Le Mans round was Valentino Rossi who seemed to be in unbreakable form throughout the race. The 38-year-old was trading fastest laps with his team mate as the two fought to take the lead. Rossi looked to have the race, along with the championship lead in the bag until the final lap. Vinalês slipped through at Garage Vert after Rossi ran wide, gifting the Spanish rider the win and the lead in the championship lead. From here on Rossi was on the back foot and pushed hard to make up the gap until, three corners from home the Italian lost the bike and slid into the gravel unhurt. 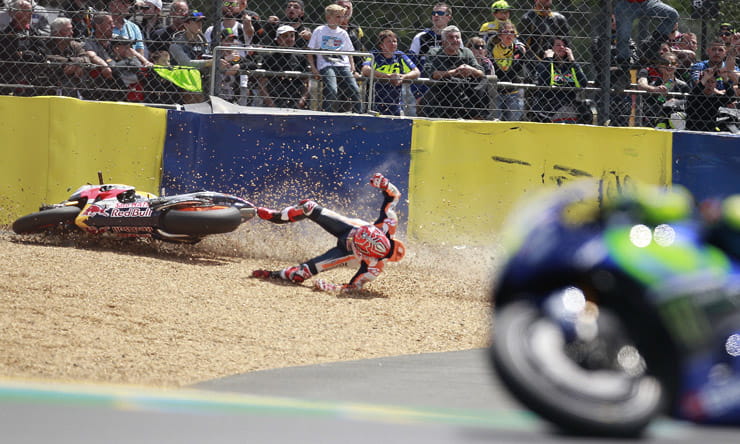 This crash left hometown hero Johann Zarco free to collect the second place prize in front of some deliriously happy French fans. The second place is the first Tech3 podium since Misano 2015 when Bradley Smith came second in a flag to flag race. The podium marks the two time Moto2 champions first in the top flight after a stellar start to the year, which included leading on his debut at the first race of the season at Qatar. 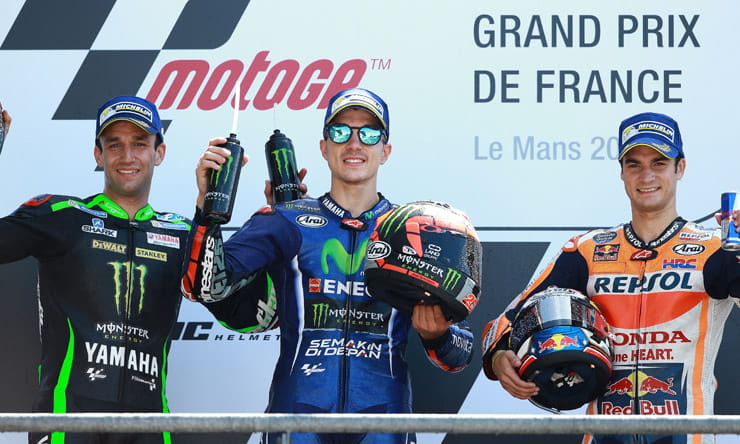 Rounding out the podium was Dani Pedrosa on the Repsol Honda who had a solid race. The Spaniard was always hovering just around the top five and had to make some robust passes to get to the podium. Cal Crutchlow was on the receiving end of just such a pass after Dani forced through on the inside, clashing fairings with the British rider, sending the Brit off the track.

The next round of the MotoGP championship takes place at Mugello on the 4th of June, follow all the practice, qualifying and race session on BT Sport.