Rossi takes Viñales under his wing 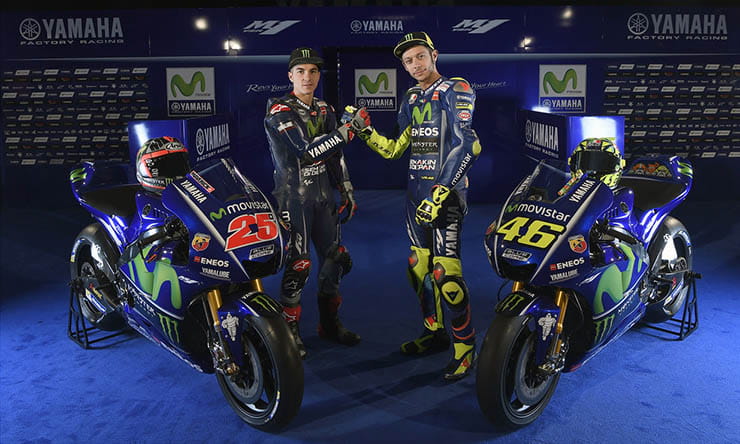 Valentino Rossi has taken new team mate Maverick Viñales under his wing, according to the man who pays their wages.

Yamaha race boss Lin Jarvis hinted that the two had covert meetings last year, while Viñales was still racing for Suzuki, and that there was a harmonious atmosphere within the Movistar Yamaha squad at last week’s pre-season test in Malaysia, where the Spaniard topped the timesheets, making a refreshing change from the often thorny relationship between the Italian and former team-mate Jorge Lorenzo.

“So far it (the relationship) is excellent,” said Jarvis, who is the managing director of Yamaha’s racing division. “Last year they already nurtured a relationship, sometimes they may have been seen together at the same time in the same truck, but they have had a mutual respect for each other beforehand and what’s good is that Maverick has outright stated that Valentino has been his idol. He continues to see him in that way and we don’t have that animosity between the two riders - it’s like a breath of fresh air at the moment.”

Jarvis (pictured) added that Rossi, who is already coaching a number of young talents through his VR46 Academy, worked closely with his new team-mate in Sepang to get the best of the new YZR-M1. He added: “Let’s be honest, Valentino is the greatest of all time so for us to have the greatest rider of all time along with the greatest talent of the moment, is a fantastic combination. At the end of the day normally the riders finish up and back to the hotel, but Maverick is very curious and motivated. He came over to Valentino, engaged with him and said ‘Vale, what about this, what about that…’ and you can see Valentino light up, because he likes to share.

“Of course, he doesn’t like to be beaten but, with his academy and his young riders, he likes to share his knowledge, so let’s see how long we can keep that going through the season. We’re under no false impressions because if we get to the back end of the season and they are both fighting for the championship, dynamics change, but in the meantime we start with a great feeling in the garage.”

While Jarvis is under no illusions about the task of keeping his two talents on speaking terms, he firmly believes that both can be serious title contenders in 2017.

He concluded: “In the last three years, Valentino has been second, second and second. So that is pretty impressive. He’s going to turn 38 next week, so to still have that speed and that edge is phenomenal and clearly he has potential to win that 10th title. Maverick in my opinion is a serious title contender this year so we’ve got two guys absolutely capable and the bike we tested in Malaysia was very good. Everything the engineers brought was working, and that doesn’t often happen. Sometimes you bring things and you scrap them, but everything we tried was working out well. I’ve already stated that we are going for the triple crown. We really want to get the rider, team and constructor titles and I think we can do it.”