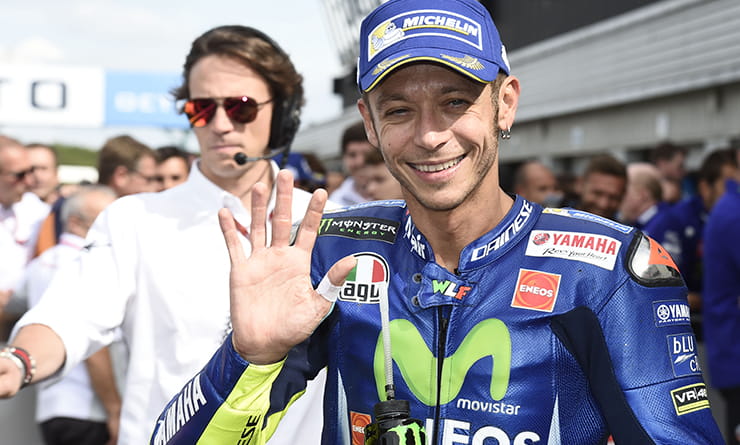 News reports coming out of Italy this evening are stating that Valentino Rossi has a suspected broken leg as a result of an enduro training accident.

The 38-year old Italian will have the injury operated on this evening at the Urbino hospital, South West of Pesaro. It's the same leg he broke during qualifying for the Italian Grand Prix back in 2010.

The nine-time world champion currently lies 4th in the world championship after his 3rd place finish at the British Grand Prix last Sunday, 26 points behind leader, Andrea Dovizioso. The injury looks certain to rule him out of Round 13 of the MotoGP World Championship at the Misano World Circuit Marco Simoncelli on 10th September and with only five more races remaining this injury looks certain to end the Movistar Yamaha rider's bid for a 10th world title.

Graziano Rossi, Valentino's father, has been reported by the Twitter account @SkySportMotoGP (the Italian MotoGP TV channel) as saying "I've spoken to Valentino. He's not optimistic, his leg makes him (feel) very bad."

Last night Movistar Yamaha MotoGP's Valentino Rossi had a successful operation on the displaced fractures of the tibia and fibula of his right leg.

The MotoGP star was hospitalised after an enduro accident yesterday evening.

Following a medical examination at the 'Ospedale Civile di Urbino', where he was initially diagnosed, the Italian was transported to the 'Azienda Ospedaliero-Universitaria Ospedali Riuniti' in Ancona.

Upon arrival, he received surgery between 2am - 3am by Dr. Raffaele Pascarella, Director of the Orthopedics and Traumatology Division. During the surgery the fractures were fixated using a metal pin - a locked intramedullary nail - without any complications.

Yamaha would like to thank the entire staff of the 'Ospedale Civile di Urbino' and 'Ospedali Riuniti di Ancona' for their dedication and professional care.

Meanwhile, Rossi said, "The surgery went well. This morning, when I woke up, I felt already good. I would like to thank the staff of the Ospedali Riuniti in Ancona, and in particular Doctor Pascarella who operated on me. I'm very sorry for the incident. Now I want to be back on my bike as soon as possible. I will do my best to make it happen!"