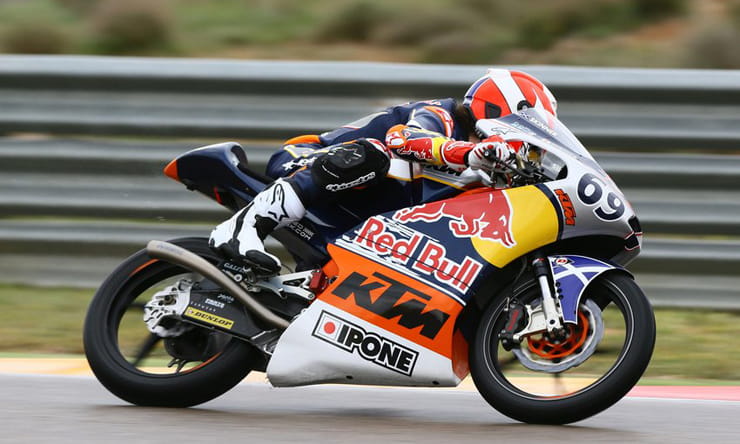 The Red Bull Rookies Cup is a feeder series to Moto3, Moto2 and MotoGP. The bikes have identical 250cc four stroke engines that are similar to Moto3 bikes in their configuration and power output. The riders all take part in assessments in the pre season with the most promising riders winning a place on the grid. The rookies don’t just race in front of hundreds of thousands of fans but every MotoGP team as well, making the stakes incredibly high and the racing on a par with anything you would see in the higher classes.

The race started in perfect conditions with Rory qualifying in ninth position. In his own words Rory made a “really poor start” that left him in a melee of bikes at the first corner and four people in the gravel. Thankfully Rory’s poor start meant that the incident happened ahead, instead of around him, and he was able to take evasive action to avoid.

As the race went on he clawed his way up from the bottom end of the top ten to put in personal best times lap after lap, which put him in touch of the leading group. A massive push, which included overtaking four potential podium place finishers in one lap, saw the plucky lad from Perth in a straight fight for the win, with Rory hitting first place on lap 15.

As Rory rode a mature and measured race, keeping a gap of around one second to the second placed Ai Ogura, the two both gapped the chasing pack by over a second. With two laps to go Ogura made a clean move down the inside of the young Scotsman in the middle part of the penultimate lap.

With Skinner shadowing Ogura in the closing stages a crash at the last corner, involving Kazuki Masaki and Walid Soppe brought out the red flags to stop the race. The riders all thought that Japanese rider Ai Ogura to be the race winner. The celebrations in Parc-Ferme (the winner’s enclosure) saw an emotional Ai Ogura speak to the press with it not being until all of the top three had been interviewed that they realised Rory Skinner had actually won!

When a red flag is waved in racing the result does not count for the lap the riders are on, to be fair to competitors who could have been taken out in a major incident, the result is counted back, in this scenario meaning that Rory had won.

Dan Jones, another Bennetts’ sponsored ‘Rookie, had a solid first outing in the class, finishing 17th place, Dan is another rider looking to make his way in this class after dominating in the British Moto3 championship in 2016.

BikeSocial caught up with Rory after the race:

BikeSocial: So Rory, congratulations, your first win, how does that feel?

Rory Skinner: Really good, I made an awful start which didn’t put me in a good position for the first corner but I managed to drop back, find my rhythm and move forward. I couldn’t be happier!

BS: The first corner saw a big crash and a number of riders in the gravel, how did you avoid that and did that affect you?

RS: Because of my start I was further back than I should have been which meant I could see it unfold, I was lucky to avoid it – and probably should have been caught up in it! – I’m glad I got through that and managed to build the pace to the front.

BS: the win is great but does that help you or hinder you in the coming rounds, do you now have a target on your back?

RS: Its hard to say, I had a really good practice and qualifying where I could just ride around alone and work on the lap time which really helped. I guess next time out the pre race sessions wont be so lonely.

BS: do you feel more pressure?

RS: Red Bull Rookies is so competitive you always have pressure; you literally have no idea what’s going to happen! All we can do is keep going and try again tomorrow!

BS: Thanks for your time Rory, congratulations and good luck with the rest of the weekend.

RS: As always I’ll be trying my best, thanks for the support guys.

The Red Bull Rookies Cup can be viewed by signing for a MotoGP Video Pass at MotoGP.com – the results and news can also be followed at: www.redbullrookiescup.com