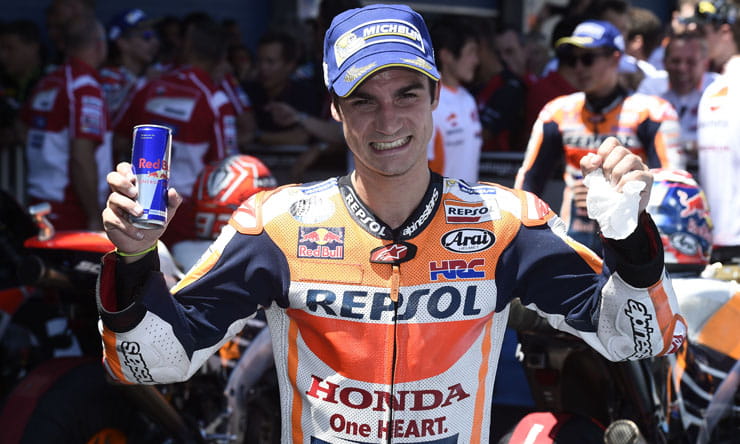 Dani Pedrosa took the victory at Jerez to become the winner of the 3000th motorcycle Grand Prix race at the Spanish circuit.

The race started in perfect conditions with a Honda lock out of the front row. Pedrosa, Marquez and Crutchlow took the riders into the first corner with the fast starting Andrea Ianonne on the Suzuki joining the fray. Dani Pedrosa rode a master class at the front, constantly managing the gap to second placed Marc Marquez and never looking like he was in any danger of relinquishing the lead. The win is the first for the 31-year-old Spaniard since the San Marino Grand Prix last year and secures fourth spot in the championship, 11 points ahead of Ducati’s Andrea Dovizioso. Pedrosa was understandably jubilant after the race, he had this to say.

“It was a very nice race, I’m very happy…it wasn’t as easy as maybe it seems but I enjoyed it. At the beginning I was so focused and it was important to do a very focused race, in these kind of conditions the track wasn’t as grippy as in practice, maybe because of the temperature but I felt less grip, I was running the hard front like many riders…early I pulled a gap, then I tried to keep my pace under control. At some point Marc started to close a bit. At two or three corners the front was very critical and it was easy to make a mistake if I pushed too hard. Normally Yamaha are the favourites at this track, usually every year at least one is on the podium. So we got back some points we lost after the mistake in Argentina, and it’s more interesting for the Championship.”

Jorge Lorenzo was back to his best in Jerez as he took his first podium for the Ducati team. Lorenzo has been struggling to find a set up for the Ducati that works for him but seemed happy with the bike today. The ‘Spartan’, as he likes to be known, celebrated his 30th birthday this weekend and, although helped by fallers ahead of him, was overjoyed with the result saying: “Best present ever, I couldn’t have a better present for my 30th birthday. It’s more than a victory and more than a victory with Yamaha.” Lorenzo sits ninth in the championship standings on 28 points.

With Pedrosa cool and calm at the front, the man to watch in the early stages was Tech3 rookie Johann Zarco. The Frenchman has in the past been given a negative press post race by some of the riders, today he was nothing short of mercurial. Helped by a softer tyre choice that inevitably saw him fall away at the end of the race, Zarco showed all of the skill and spirit that it takes to be a two time Moto2 champion. Clean but hard moves on Rossi, Crutchlow and Marquez, all within a matter of corners had the Spanish crowd on their feet. The Tech3 riders tyre choice eventually saw him slip back and finish in fourth place, you have to think though a podium this season is a certainty at some point. 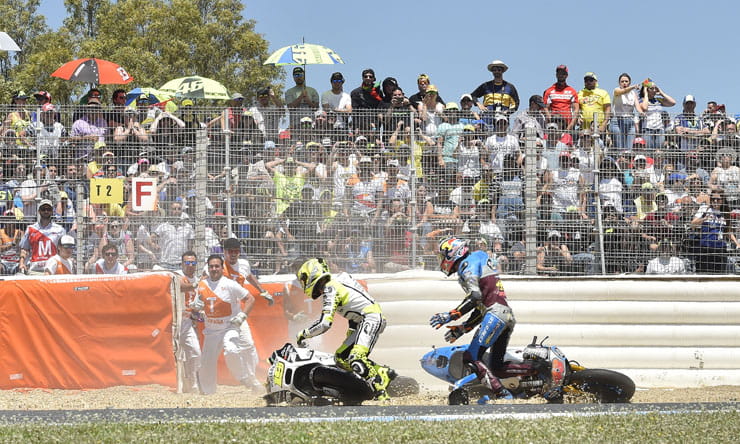 Front row starter Cal Crutchlow showed much promise in the early part of the race and was right up there for the top five scrap until a fall at the Criville corner saw the Brit looking deflated as his hopes of another podium and more points for the LCR Honda team lay in the gravel.

Alvaro Bautista and Jack Miller tangled shortly after causing both riders to end up in the gravel. Miller was seen to be pushing Bautista as the two moved to collect their bikes from the gravel trap! Miller later said the riders had “Worked it out” after speaking to each other in the pits. He went on to say, “Everyone was excited at the start, it’s a shame. I’m happy to go down there and work it out, it’s a bad way to end a good weekend.” 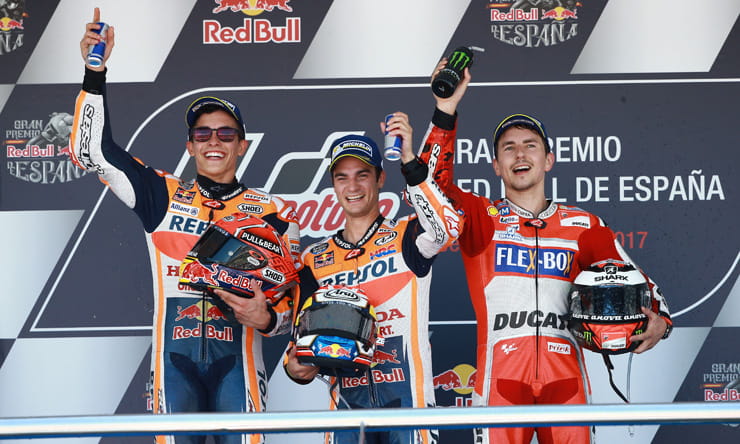