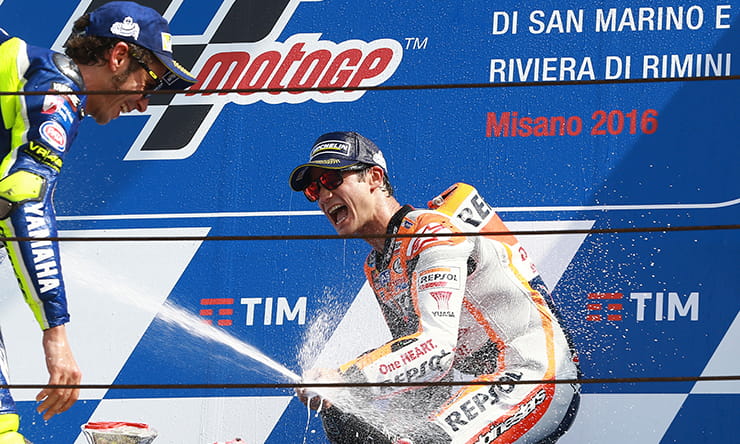 The 2016 MotoGP World Championship has yet again delivered an unpredictable race with Dani Pedrosa storming through from eighth on the grid to become the eighth winner in as many races.

Yesterday’s race at the Misano World Circuit Marco Simoncelli played out under typical Adriatic sunshine, and the 88,000 sunbaked spectators that crammed the small circuit were rewarded with a battle royale in Valentino Rossi’s own back yard.

Eventual winner Dani Pedrosa was one of only two riders to risk the softer compound front tyre, and as the other riders suffered a comparative lack of grip from the hot track surface temperatures, the diminutive Repsol Honda rider was able to slice his way through the pack making short work of the leaders and eventually winning 2.8 sec from Movistar Yamaha’s, Valentino Rossi with his team mate and pole sitter, Jorge Lorenzo, in third, a further 1.5 sec further back.

After taking his 29th premier class win and first since Malaysia last year, Pedrosa said, “It was a great race, and it has been a long time since I’ve had these feelings. Even I was surprised by the performance I put in today because I hadn’t expected to go so fast; we were fantastic. The key was the pace; I was able to fight my way through, especially in the final part, and being consistent allowed me to catch the riders at the front.” 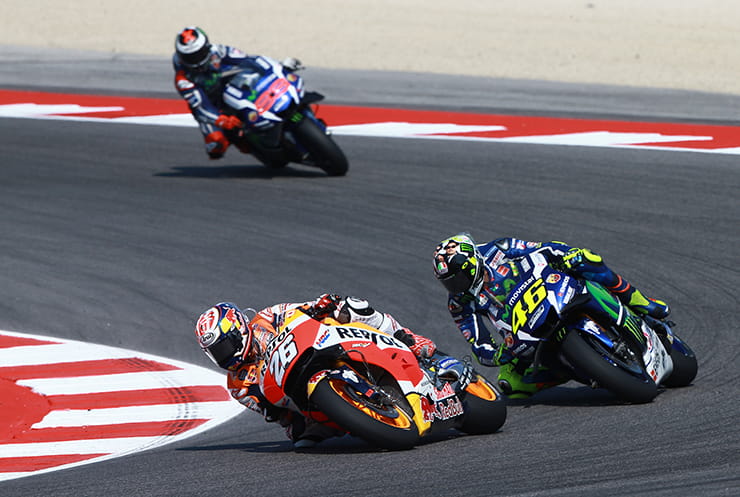 The victory now means Pedrosa has won at least one every season for Honda and the 30-year old Spaniard now sits fourth in the table on 145 points, now only 17 behind third placed Lorenzo.

“It’s very nice for me to take a victory again, after all the effort made by those who have been with me in this challenging season so far: my family, my team and my fans. It has been very difficult, so I’m very happy for all of them,” he continued.

Home town favourite Rossi did his best to whip the Italian crowd into a frenzy and looked very much a potential race winner in the early stages. The Italian led for much of the race and was for the most part untouchable. There was some extremely robust overtaking performed on his Ducati bound team mate Lorenzo, which fired up the rivalry between the Movistar Yamaha riders and made for an entertaining post-race press conference. Speaking after the race, Rossi still has eyes on reducing Marquez’ points tally in the championship, he said: “It's still too big, 43 points with five races to go, it's a big gap, but it's always a great feeling arriving in front of Marquez because he is very strong, very fast and to beat him in the race means you did a great race.”

Rossi closes in on Marquez in the championship and sits second on 180 points, he said: “I tried to resist but he arrived with seven laps to go. I tried to make a lap behind him at the maximum but it wasn't my pace; he was too strong. But it was a great race and a very good weekend. Other than just the championship, it's always great to beat Marc - because you know if you have, you've done a very good job."

Rounding out the podium was Lorenzo who made his first visit to the rostrum since Mugello. A string of wet races and his inability to get his head around the Michelin wet tyre have meant the three-time world champion sits third on 162 points. “Today was Dani's day and he did everything perfect. He rode unbelievably. He really deserved this victory because he's fought a lot during this period and it's been a tough time. I tried all race to close the gap but today wasn't my day. They were faster and I just have to accept it. In some corners I had some trouble but by the end the bike was working quite well. The hard tyre wasn't for us, the medium was good but the soft we don't know because we didn't try it. Maybe we could have done in warm up. Valentino was so consistent and I just needed one or two tenths more - so I can't be very happy but I can't be really disappointed because I'm on the podium and I did my best today."

Alex Lowes had a mixed weekend and after showing good pace in qualifying the rider slid out of contention early in the race. However, it was confirmed he will continue to replace the injured Bradly Smith at the next round in Aragon on 25th September. 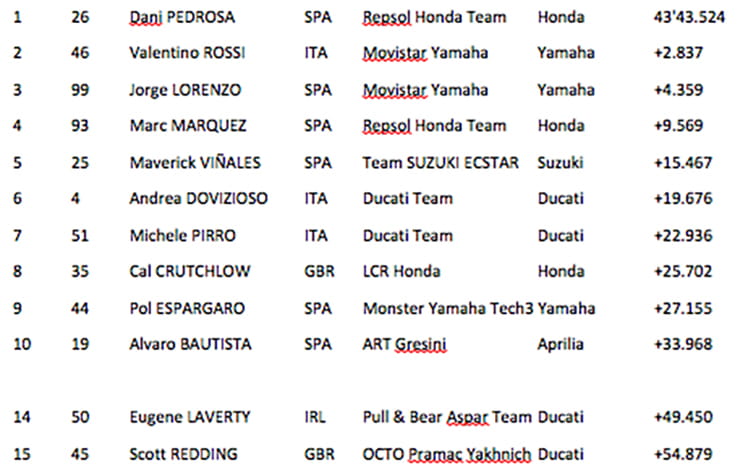