Doohan, Edwards and Gardner set to appear at British GP as Pro-Am returns 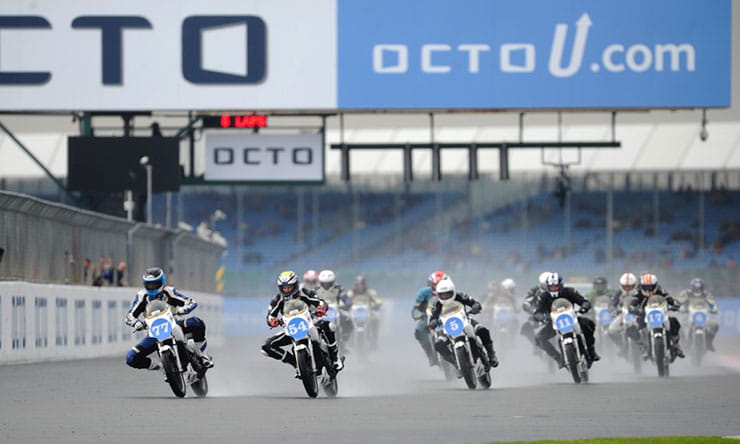 There will be plenty of classic bike action going on as support to this weekend’s British Grand Prix at Silverstone, with the revived Yamaha Pro-Am race improved and returning and a number of historically significant two-stroke Grand Prix bikes parading in Barry Sheene tribute laps.

The tribute, held to mark 40 years since Sheene won his first 500cc world title, are scheduled to take place on Friday and Saturday afternoon, as well as Sunday morning. The legendary riders will also be available for autographs at 11:45 each day in the tented village area, where all fans will also be able to see the bikes throughout the weekend.

Among the legends on show are five-time 500cc world champ Mick Doohan, who will ride a 1985 NS500 Honda triple and 1998 NSR500V V-twin and fellow Australian and 1987 world champ Wayne Gardner, who will ride an exact replica of the 1981 Moriwaki Kawasaki on which he made his name at the prestigious Suzuka 8-hour endurance event.

“I admired Barry a lot,” said Gardner. “Especially his marketing ability and his ability to deal with the media. I feel privileged to have looked in on his world.”

Doohan added: “Barry had so many sayings that stick in my mind. He was a great mentor and a great friend.”

The tented village is a new initiative at the Silverstone GP and will also feature the paddock area for the Bennetts-backed Yamaha Pro-Am race.

The Pro-Am, a revival of the classic 1980s race series, returned at last year’s Grand Prix and this year’s six-lap race will take place on Saturday evening, with the drawing of keys and practice on Friday. Last year’s race, which took place in soaking wet conditions, was won by Niall Mackenzie. This year’s event promises to be more spectacular, with the 30bhp two-strokes having undergone further development to improve reliability and create greater parity between the machines.

As well as the returning Mackenzie, the field features two former Grand Prix winners. Alan Carter, an alumni of the 1982 series and winner of the 1983 French 250c Grand Prix, will once again don his leathers, as will German rider Stefan Prein (pictured), winner of the 1990 Yugoslavian 125cc Grand Prix.

Prein, who now works as a rider coach for the Marc VDS MotoGP and Moto 2 team, said: “I am looking forward to making my Pro-Am debut at Silverstone. I’ve heard so much about the original series from the British guys in our team who remember it the first time around and I can’t wait to experience it for myself now.

“The Pro-Am organisers have done a great job to ensure that the bikes are as evenly matched as they were in the 1980s, so it will be a close battle on track, even if some of us don’t enjoy the same power to weight ratio that we had back then!

“Our riders, Jack Miller, Tito Rabat, Alex Marquez and Franco Morbidelli say they will be there to support me in the race. I suspect the reality of the situation is they are only turning up to abuse me if I’m not quite as fast as I may have led them to believe. No pressure then!”

In addition to all the on track activity, Sheene’s 1976 and 1977 title winning Suzuki RG500s will be on display in the tented village, while his son Freddie will parade his 1980 Yamaha OW48R on the tribute laps.

The full list of riders and bikes for the  Barry Sheene 40th Anniversary Tribute parade and display is:

Riders competing in the Pro-Am are: