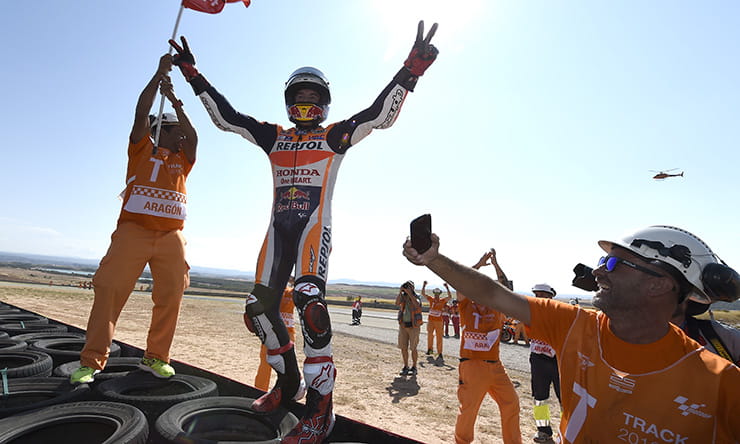 Repsol Honda's Marc Marquez tightened his grip on the 2016 MotoGP world championship, extending his advantage to 52 points after a dominant display at Aragon today.

The 23-year-old Spaniard overcame a near miss in the opening stages of the race when he miraculously saved a front end crash on lap three. That incident pushed him back to fifth behind Suzuki's Maverick Vinales, the Ducati of Andrea Dovizioso and the Yamahas of main title rivals Valentino Rossi and Jorge Lorenzo, but Marquez maturely composed himself and held station while his harder compound front tyre worked up to its ultimate performance, before moving into a lead he would not relinquish halfway through the 23 lap race.

Behind him, Lorenzo looked back to his best to snatch second on lap 19 of 23, with Rossi rounding out the podium. Early pace setter, British GP winner Vinales, slipped back to fourth with Cal Crutchlow maintaining his impressive run of form to take fifth, making him the leading Brit and top non-factory rider.

Speaking after the race, Marquez said: “I’m very happy to have taken the win at a home Grand Prix, and one of my favourite races. I was waiting for this GP, it was a ‘red point’ on the calendar for me, as I saw it as one where I wanted to attack and where I could win the race. It was an important victory, but nothing is finished yet. I said yesterday that something can always happen in a race, and it was a miracle that I didn’t crash today when I almost lost it in turn seven. That was when I decided to relax a little and go back to my mentality from practice of riding precisely and braking in the right places. All this made for a more entertaining race, with many overtaking moves at the start, and a second part in which I was able to open a gap to Valentino, which was important. He had gone several races gaining points on us, and we wanted to stop that trend, because otherwise it would boost his morale and perhaps create doubts for us. Now we leave Aragón with a larger advantage and more convinced ahead of the flyaways. I was very happy on the podium, but the most emotional moment for me today was when [brother] Alex scored his first Moto2 podium. That was really special for me.”

That Moto2 race was dominantly won by Britain's Sam Lowes, while the year's first world champion was crowned in the Moto3 class, when South African Brad Binder (pictured) rode like a champion to take second on his Red Bull KTM, giving him an unassailable 106 point advantage over Spain's Jorge Navarro with four races remaining.

It was a tough day for the other Brits in the MotoGP paddock. Bennetts-backed Scott Redding's run of ill luck continued as he was knocked off my OCTO Pramac Ducati team-mate Danilo Petrucci on the opening lap. The Italian was penalised with a ride through penalty as punishment for his misdemeanour, but it was little consolation for Redding, who remounted but was unable to score points in a race with only one non-finisher. Northern Ireland's Eugene Laverty, who earlier in the week announced his return to world superbikes with Aprilia, lost a place to Hector Barbera on the final lap and scored two points for 14th place, while Alex Lowes was unable to make the grid in his third and final race as a stand in for the injured Bradley Smith as he himself picked up a foot injury in a practice crash on Saturday morning.

Moto3 also saw John McPhee score three points for 13th on the underpowered Peugeot, while fellow Scot Rory Skinner completed his Red Bull MotoGP Rookies Cup season with an eventful weekend. The 14-year-old Bike Social-backed rider ran off the track on the opening lap of Saturday's race, battling through from last to finish third, a few tenths from the win. Sunday's race was almost a repeat as he tagged another rider on the opening lap and ran off the track. He was able to work his way up to fourth but eventually crossed the line in eighth to consolidate his sixth place in the championship, with his reselection for the 2017 Rookies season also being confirmed at the weekend.