TV GUIDE: Where and when you can watch this weekend's title deciding race action 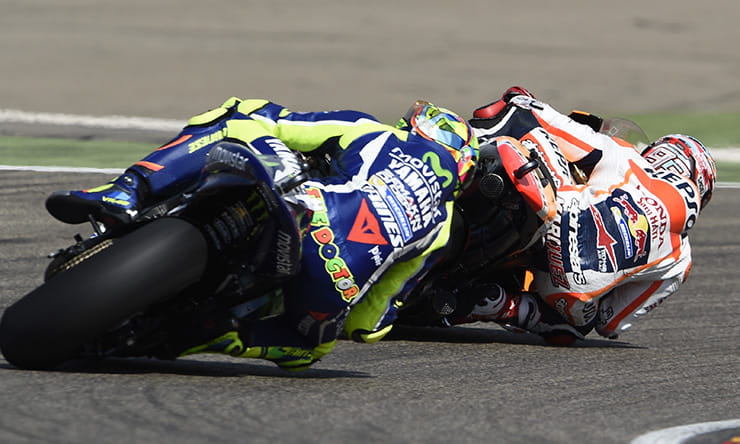 With three major championships potentially being decided this weekend, there’s plenty of reasons to spend Sunday in front of the telly for a marathon of bike racing.

It’ll be an early start or a straight through crew to catch the Japanese Grand Prix from Motegi, where Marc Marquez can potentially tie up his third MotoGP world championship.

The Spaniard needs to leave Japan with a 76 point lead in the championship to win the title with three races to go but that’s a real long shot. The permutations are many, but Marquez lifting the title will only come about if he wins the race, with Jorge Lorenzo out of the top three and Valentino Rossi finishing 14th or below.

Motegi has never been kind to Marquez, who has never won in the MotoGP class in Japan, and indeed the man himself is playing down his chances, saying that he is looking at damage limitation this weekend. He said: “The Japanese Grand Prix is an important appointment for us as it is Honda’s home race and one where we have great memories, as we clinched the title in 2014. On the other hand, it’s a circuit that has always been a bit challenging for us. So for example, if Aragon was a track that I marked for attacking, Motegi is one that I marked for giving up as few points as possible. That said, we’ll approach it with an open mentality, aiming for the best result possible but ready to adapt to the circumstances.”

By contrast, Marquez’ Respol Honda team-mate Dani Pedrosa is a three-time Japanese Grand Prix winner, having stood upon the top step last year and in 2011 and 2012. He said: “Motegi is one of my favourite tracks, and in addition to the fact that it’s Honda’s home circuit, I’ve had good results there. Clearly, we want to get the best result possible in front of our Japanese fans, but we must arrive there and start working on the bike and the tyres to understand if we’ll be able to be as competitive as we have been lately. At this moment, the most important thing is to find the best combination between the tyres and the bike, with myself also in the formula of course, to try and start to go well beginning Friday.”

One championship that is more likely to be resolved this weekend is world superbikes, where Jonathan Rea (pictured) effectively needs to outscore his Kawasaki team-mate Tom Sykes and Ducati’s Chaz Davies to win his second title in a row. The Ulsterman goes into this weekend’s double header in Jerez with a 48 point advantage over Sykes and 81 over Davies. If he can extend that to 50 or more, he’ll once again tie up the title in Spain – ahead of November’s final round in Qatar.

Rea said: “Jerez holds very special memories from last year so I am excited to go back there. We had a very productive mid-season test at Jerez, where we not only get to refine our current model, we also got to work on some items for 2017. It seems like we are in a good way with the bike in races and this is the first opportunity I have to win the championship this weekend. If we do a good job we can achieve our target of being world champions. That is in the back of my mind but also we have to be clever, because Tom and Chaz are riding really strongly and I am sure some others will also be strong in Jerez. So we need to be prepared to set-up the bike well with the team and then what will be will be. I’ll just try to go out and have two solid races. I have a lot of support coming from back home as well for this weekend.”

Byrne vs Haslam - the BSB showdown

One title that will definitely be decided this weekend is the British Superbike Championship. Shane Byrne holds a 17 point advantage over Leon Haslam going into the triple header at Brands Hatch, with Dan Linfoot and James Ellison both having a slim mathematical chance to win their first titles. With 75 points on the line, Linfoot and Ellison need a miracle if they are to overhaul the 67 and 73 point deficits they face respectively, but with conditions often cold, wet and slippery in the end of season shootout, anything could happen.

Four-time champ Byrne has the luxury of being able to follow Haslam home in each of the three races, or even fail to score in one should he win the other two, but the British superbike showdown has thrown up its share of last round twists over the years, and if you can’t get along in person it is definitely worth tuning in to watch the action unfold on telly.