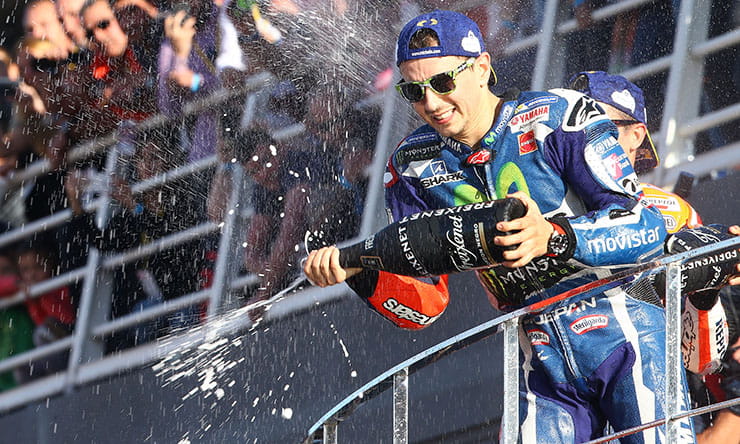 Jorge Lorenzo signed off his nine-year Yamaha career with a masterful display, overcoming tyre troubles to take a lights-to-flag win at Valencia today.

On a track that is notoriously difficult to overtake on, Rossi and Iannone engaged in a captivating battle while Marquez, running a harder tyre option than his rivals, held a watching brief.

Lorenzo’s lead was threatened in the later stages as his rear tyre wore out, causing his lap times to drop off while Marquez’ more durable rubber became an advantage. At the end of the 30 lap race, Lorenzo held on to take the win by 1.1 seconds from Marquez, with Iannone signing off his Ducati career in third – ahead of Rossi and Vinales on the Suzuki.

Speaking after the race, Lorenzo said: “Very happy now I can relax because I have a perfect end to this stage of my career with Yamaha. It was very emotional. Before the race I did not expect to win because I know that Marc was very strong. Luckily I could build a big lead at the beginning and maintain a bit of distance. I suffered so much in the last 10 laps because when I saw Marc was in second place I knew he was going to attack and push to the limit. Tonight we will have a big celebration and I am delighted to give this one last present to Yamaha.”

In a tough day for the Brits, Cal Crutchlow crashed out just after half distance but retained seventh in the championship to take the honour of being the top non-factory rider in 2016. Bradley Smith ended his Yamaha career in ninth, the Oxfordshire rider set to join the new KTM squad for 2017, while Scott Redding’s subdued end to a sometimes promising season ended with 14th. He remains with the OCTO Pramac Ducati squad next year but will run a 2016-spec bike after being outscored by team-mate Danilo Petrucci, earning the Italian the latest equipment for 2017.

Eugene Laverty ended his MotoGP career out of the points, in 16th. He moves back to world superbikes next year but at least has the consolation of finishing ahead of Smith and Redding in the standings, ending the year in 13th on his 2014-specification Ducati.

Testing for 2017 starts in Valencia on Tuesday, with riders getting the chance to ride with their new teams for the first time. The most significant of the rider changes sees Lorenzo move to Ducati, while Iannone makes the switch to Suzuki and Vinales joining Rossi after taking Lorenzo’s slot in the factory Yamaha squad. Briton Sam Lowes will also be in attendance on his official debut on the factory Aprilia MotoGP machine.