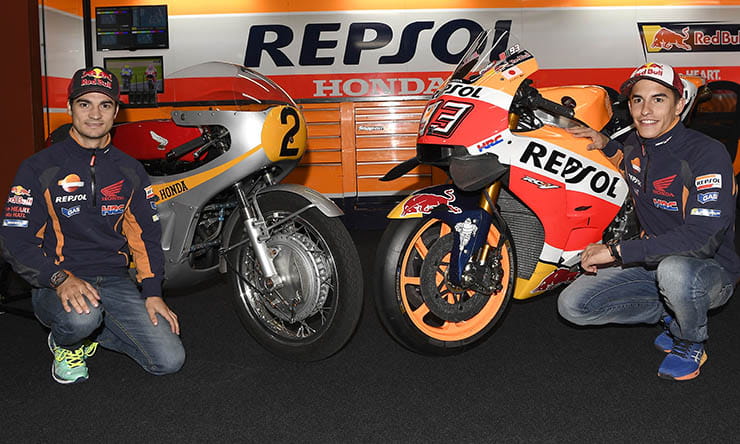 Honda commemorated its 50th year competing in top flight of motorcycle racing with a special ceremony ahead of this weekend's Japanese Grand Prix, held at the company's own Twin Ring Motegi circuit.

The company has brought the bike that it first entered into 500cc Grand Prix racing with, the beautiful RC181. Shown together with this season's ultra-high tech RC213V, the original Honda Grand Prix bike is stunning and comes from a time when gears, timing chains and drawing room desks were the battlefields engineers fought each other on, a million miles from today’s CNC machines and Computational Fluid Dynamics. The RC181 was a game changer when it first appeared at the 1966 German Grand Prix, claiming a debut win by a crushing 26 seconds. The fledgling team went onto win five out of nine Grands Prix that season, giving the team the manufacturers title for that season, while also providing them with a clean sweep of titles across all classes and ultimately ushering in a period of dominance for Japanese manufacturers both on and off track.

Since Honda joined the Grand Prix circus they have won 277 (500cc/MotoGP) grand prix, 38 riders and constructors titles. This season Repsol Honda's Marc Marquez is leading the championship by 52 points from Valentino Rossi, but three-time Motegi winner Dani Pedrosa will be absent after sustaining a broken collarbone during today's free practice.