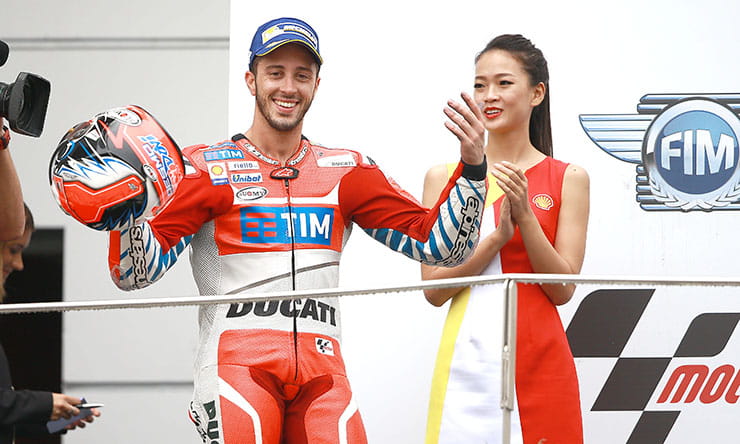 Starting the race from pole position, Dovizioso ran in the top three throughout the race, running comfortably with team-mate Andrea Iannone and Valentino Rossi in the opening laps, while the Hondas of world champion Marc Marquez and Cal Crutchlow gave chase along with outgoing champion Jorge Lorenzo.

Heavy rain had caused the start to be delayed and led to a soaked surface that saw the entire grid lined up on a full wet weather set-up.

Crutchlow and Marquez both crashed out on lap 12, losing front grip on their Hondas, while Iannone, who led most of the opening laps and had just been relegated to third when he pushed too hard, crashed on lap 13 of the 19 lap race.

That left Rossi in the lead and favourite to add to his 88 MotoGP race wins, only to had the lead to his fellow Italian after running wide with five laps to go. The consistent Ducati man was able to pull away and take his second career win by over three seconds, with the equally steady Lorenzo claiming the final podium slot in a distant third. Fourth and fifth went to the impressive Avintia Ducati privateers Hector Barbera and Loris Baz, with Eugene Laverty the best of the Brits in 12th. Bradley Smith claimed a lonely 14th, with Scott Redding salvaging one championship point for 15th after a tough weekend.

Speaking after the race, Dovizioso said: “It was very important for me to win a race this year: I’ve been trying for so long and I’ve come close on several occasions, so satisfaction for today’s result is truly immense. I really powered to the win, because in the first half of the race I could not push too hard, but I didn’t give up, I didn’t make any mistakes and at the right time I passed both Iannone and Rossi and set my own pace. I am very happy about the improvements we have made this year, both in the bike and with my team, but also on a personal level. I am working hard also for next year and this win, which has come at the end of the season, is just reward for all the efforts.”

The final race takes place in Valencia in two weeks’ time. With Marquez and Rossi confirmed as the championship top two, and the Moto2 and Moto3 titles decided in favour of Johann Zarco and Brad Binder respectively, the pressure will be off as the riders look to go into the winter break on a high.