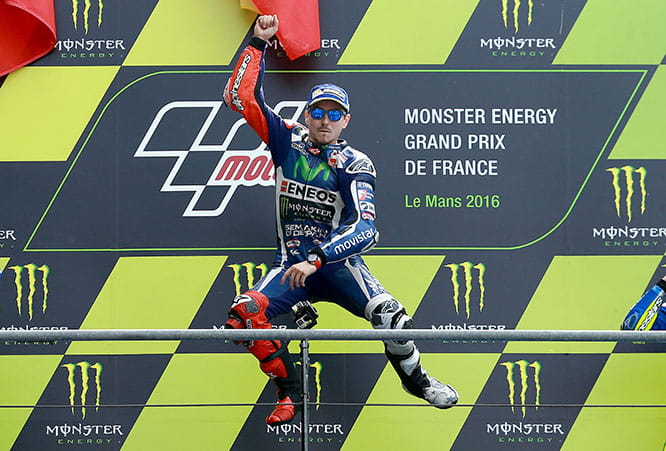 Jorge Lorenzo produced another masterclass to win the French MotoGP that turned into a race of attrition.

The world champion was never headed in the 28 lap race, as a number of dramatic incidents unfolded behind him at a track that is notoriously harsh on the front tyre.

Fan favourite Valentino Rossi bludgeoned his way through from the third row in the opening laps to create a thrilling four-way battle for second between himself, Ducati’s Andrea Dovizioso and Andrea Iannone, and Marc Marquez on the Repsol Honda.

Iannone was the first of the front runners to depart the scene, losing the front end on the 11th lap and the battle came to an end four laps later, when Dovizioso and Marquez crashed out in synchronised but separate crashes, handing Rossi the second place and leaving Maverick Vinales to take the final podium spot on the rapidly improving Suzuki GSX-RR, the manufacturer's first since 2008. 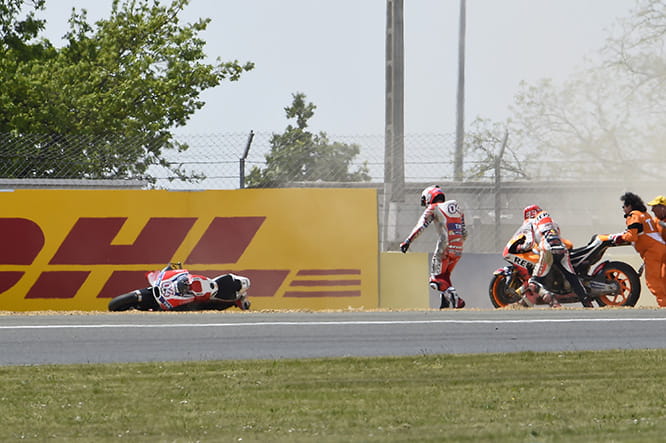 It was a miserable day for the Brits with Scott Redding dropping out with mechanical problems after a few laps and both Cal Crutchlow and Bradley Smith going down in separate incidents. Ireland’s Eugene Laverty gave another solid showing to come home 11th on the Aspar Ducati. He sits ninth in the championship.

Lorenzo’s win moves him to the head of the championship. He sits five points ahead of Marquez, who remounted to claim three points as the last classified finisher in 13th place. Rossi is a further seven points back in the championship, in third. Speaking after the win, he said it was: "a perfect race" and that he wanted to "maintain a high tempo."

He added: "In the race I knew Marquez had the chance to fight for the victory with me, or if he wasn't very fast, he would have been second or third and that would have meant he would still have kept his first position in the championship, but he crashed. Now in the championship three riders scored zero or very little points in one race, so in some way we are starting the championship from zero again after those races, but with us being five points ahead."

Sam Lowes was the only British rider to leave Le Mans with points from any class. Coming into the race as Moto2 championship leader, the 25 year old battled through to sixth on what was a tough day at the office.