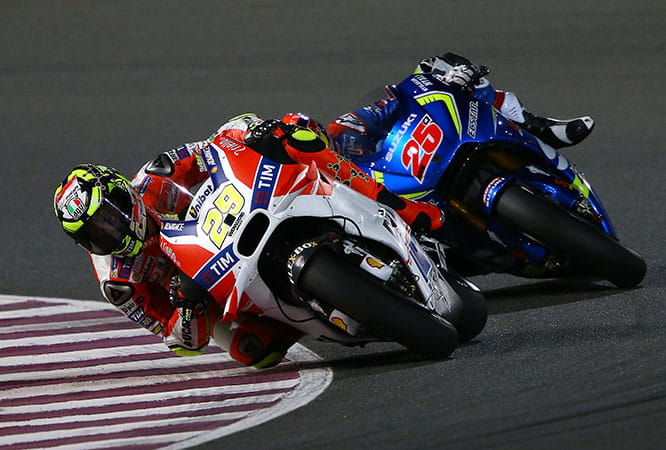 The MotoGP landscape for 2017 and 2018 became clearer this morning as Maverick Vinales and Andrea Iannone both signed factory deals that will see them race for Yamaha and Suzuki respectively for the next two seasons.

Vinales, Moto3 world champion as recently as 2013, was the most coveted young rider on the market following two good seasons on the developing Suzuki GSX-RR. He takes the most coveted ride in the paddock, filling the seat vacated by world champion Jorge Lorenzo on the factory YZR-M1. Iannone, ousted by Lorenzo at Ducati, completes the merry-go-round, by replacing Vinales at Suzuki.

Today’s announcements mean that factory seats at Ducati and Yamaha are now taken, with Vinales joining Valentino Rossi at the factory Yamaha team and Andrea Dovizioso lining up with Lorenzo at Ducati.

Dani Pedrosa’s recent commitment to Honda for two more years, where he will almost certainly be joined by Marc Marquez, means that the only established front-running factory ride to be established is the second seat alongside Iannone at Suzuki. Moto2 man Alex Rins is much fancied to take that ride but, with the conservative nature of MotoGP team bosses, it would be no surprise to see Aleix Espargaro remain with the factory for a third year.

With the top seats now all but filled, expect the second tier factory rides to shake themselves out in the next few weeks. MotoGP new boys KTM have still to announce who will join Bradley Smith on their RC16 racer, while Aprilia are expected to have Brit Sam Lowes on one of their bikes.