Dovizioso confirmed at Ducati for 2017 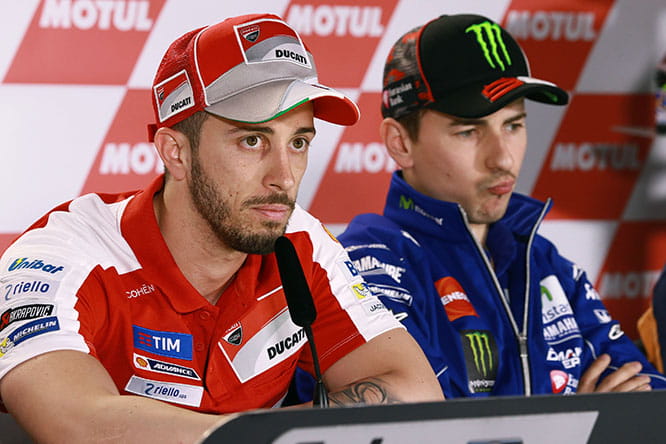 Ducati have confirmed that Andrea Dovizioso will remain with them for a further two seasons, joining world champion Jorge Lorenzo on the rapidly improving Desmosedici MotoGP machine.

Dovizioso, who is currently in his fourth season with the Bologna manufacturer, lies a lowly 11th in the championship after a luckless campaign but has been a podium contender all year. The decision to retain the 30-year-old means that there is no place in the official Ducati team for Andrea Iannone, who has been fast but erratic in his second season as a factory rider, and who controversially took himself and Dovizioso out of certain podium finishes on the last lap in Argentina.

Speaking of the decision to favour Dovizioso for the ride next season, Ducati boss Gigi Dall’Igna said: “It’s never easy to take a decision like this one, especially when you have two great riders like the two Andreas in your team. We are very happy that Dovizioso has agreed to stay with us for the next two years, and together with him we can continue the successful work we began four years ago in order to reach the ambitious aims we have set for ourselves. We are sorry for Andrea Iannone, who at the end of the season will no longer be a part of the team. Andrea has carried out an important job in these years and has made a significant contribution to the development of the Ducati Desmosedici GP. For this reason we would like to thank him and we will provide him with our maximum commitment in the next rounds of the championship, in order to obtain the prestigious results that are for sure within his reach.”

Iannone, who is expected to sign for Suzuki as a replacement for Maverick Vinales, added: “Obviously I am sorry that my time with Ducati will draw to a close at the end of this season, but I am grateful to them for the opportunity it has given me in the last few years. I made my MotoGP debut with Ducati and I have grown up with them, always succeeding in improving my level of performance. In the remaining races I will give my all, as I always do, because I am convinced that thanks to the competitiveness of the Desmosedici GP we can achieve some great results.”

The 2017 MotoGP line up is rapidly taking shape, with the big three factory teams expected to confirm their riders in the next few weeks. Ducati’s line-up is now confirmed, with Yamaha expected to announce the arrival alongside Valentino Rossi, who has already committed his future to the Japanese brand. Dani Pedrosa is another who has already put pen to paper, spending a further two years at Repsol Honda, with former champ Marc Marquez almost certain to join him.