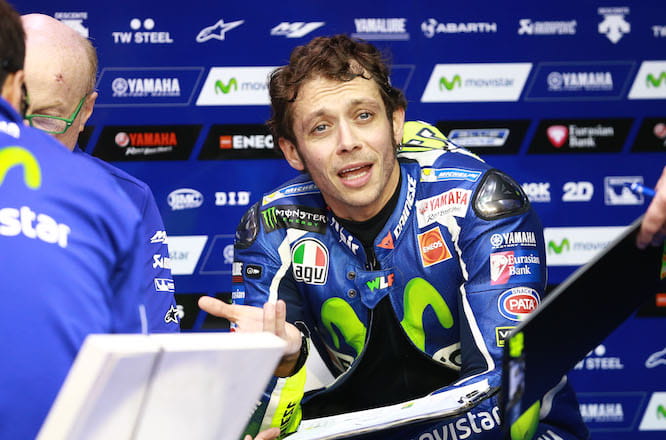 Valentino Rossi has hit out at team-mate Jorge Lorenzo after the Spaniard slowed him on a fast lap during today’s fourth free practice session.

Rossi claims Lorenzo left pit-lane half-way through the 30-minute session and did not look to see whether there was anyone coming down the straight. As he got to the corner and slowed, he was on the racing line and disrupted the start of a fast lap for the Italian.

Rossi called Lorenzo up on this on the slow down lap, but was not impressed by his response.

One issue the nine-time world champion raised was that he was given a penalty point in Misano last year for a similar move in qualifying.

“He exited the pits without looking at the track and he arrive at the first corner and tried to slow down but he was on the line,” Rossi told journalists after the session. “The problem is that I asked him why, expecting him to say sorry but he said to me like ‘what do you fucking want’.

“When we try the start I go to him but he said he was in the right. The problem is that this situation happened exactly the same in Misano in qualifying, where I did the same mistake. He was very angry with me and they gave me one point but they haven’t given him a point. I haven’t asked them to, I didn’t go to race direction but I see Mike Webb and say ‘why one point to me and not to him?’ but it is not a big problem, I was fucked last year so it doesn’t change the situation.”

After a strong qualifying Rossi will start tomorrow’s opening race from the middle of the second row in fifth and is confident of achieving a good result.

“Top five is not so bad,” he said. “I am quite happy. I can do better because we are very close, but I’m happy because from the second row if you are OK and have good pace you can make a good race. Like we saw during the practice, a lot of riders have good pace. It will be hard, today Marquez demonstrated that he is a little bit faster and has better pace. Also Lorenzo for sure, and I hope me, Vinales and the Ducatis will also be there.”