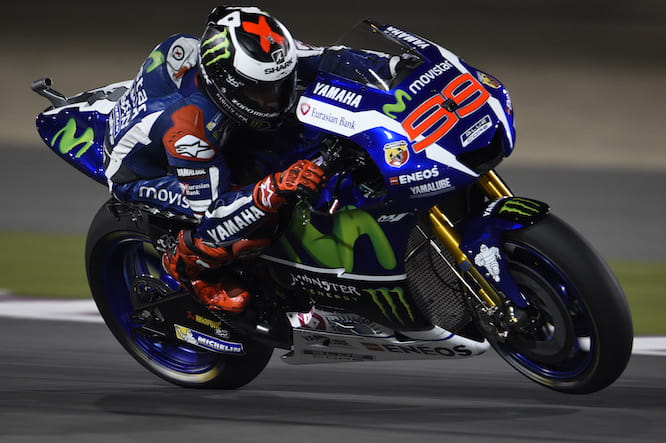 Jorge Lorenzo opened the 2016 MotoGP season with a commanding victory under the floodlights in Qatar this evening.

The Spaniard took the lead nine laps into the race and wasn’t challenged thereafter, despite a hard fought battle for second between Andrea Dovizioso, Marc Marquez and Valentino Rossi.

Lorenzo took the holeshot from the Ducatis of Iannone and Dovizioso, but at the end of the first lap the duo made use of their Desmosedici top speed to pass the Yamaha on the straight.

A mistake from Valentino Rossi allowed Marquez into fourth on lap three, establishing the order for what would be the majority of the race.

Ducati team-mates Iannone and Dovizioso swapped positions at the front, but it was the former who appeared strongest until he dramatically crashed out on lap six.

Dovizioso, Marquez and Rossi were never far behind Lorenzo but a stunning lap from Lorenzo with two to go saw him break the pack to take the first win of the year.

Marquez and Dovizioso enjoyed a close fought battle for second place, but the Repsol Honda was unable to do anything about the sheer speed of Dovizioso’s Ducati come the final lap.

A strong drag to the line saw Rossi finish just 0.100sec behind Marquez, with Dani Pedrosa and Maverick Vinales rounding out the top six.

It was a tough end to a challenging weekend for Britain’s Cal Crutchlow who crashed out in the early stages, other non-finishers included Stefan Bradl, Loris Baz, and Yonny Hernandez. 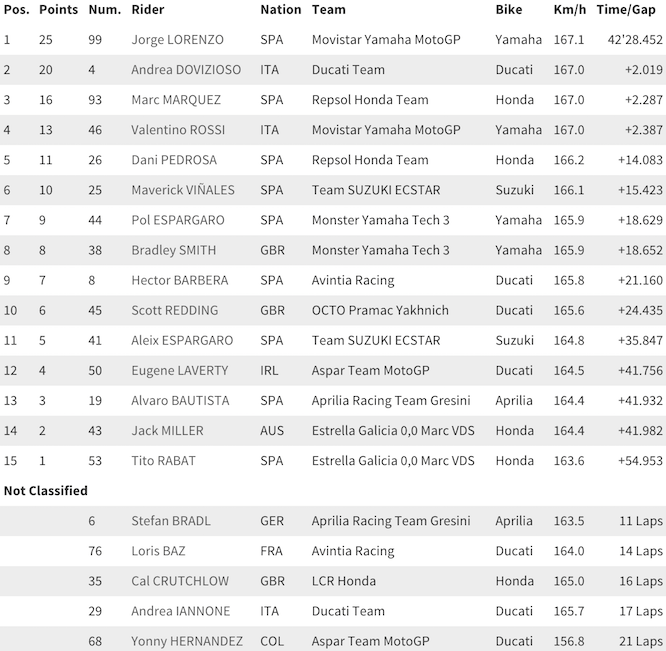