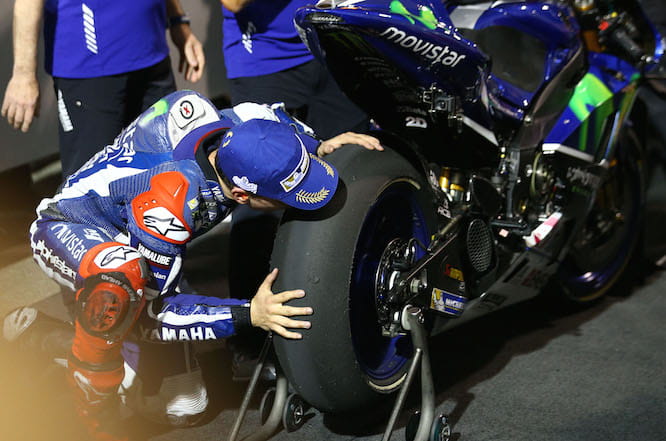 Jorge Lorenzo has credited his victory in the opening race of the 2016 MotoGP season in Qatar to a late decision to switch tyres.

The Movistar Yamaha rider opted to switch to Michelins softer option rear tyre while on the grid for this evening’s race; a decision he claims took him to his 62nd Grand Prix victory.

The Spaniard rode a commanding race to hold off an attack from Ducati’s Andrea Dovizioso. Marc Marquez finished third with Lorenzo’s team-mate, Valentino Rossi in fourth.

Lorenzo says he started to think about tyre choice after he was disappointed with his pace in warm-up.

“The fact in the warm up I was not very fast and having a lot of problems keeping the pace, looking at Maverick who chose the softer tyre and he was faster and faster made me question myself and which tyre I had to choose.

“Finally I decided to go with the soft one. Theoretically a soft tyre should be worse at the end of the race but this time it was the opposite, it was better and better. Not without sliding because I was sliding so much at the end of the race, even if I looked smooth, I was sliding a lot. Every time I was braking later and later and opening the throttle before. So it was impressive the speed I could get in the last few laps. Even with the pressure of Andrea, this make the difference in the last few laps. When Marc passed Dovizioso in the last few laps the gap opened a little but more and I could breathe more deeply.”

Lorenzo had hoped to be able to break the chasing pack once he took the lead, but the superior speed of the Ducati and a persistent Marquez meant this wasn’t possible.

“When Iannone and Dovizioso were leading the pace wasn’t that high. It looked like Andrea was dropping the pace. I recovered some metres in these corners and decided to pass him in the middle of the track, and open the gap in the last sector for avoiding his overtaking in the straight. This was the key. Anyway, when I was leading and making the pace higher he was following me and all the race it was 0.3-0.5s. I couldn’t leave him behind. I was keeping strong and believing I could be faster and my trust and believing let me win this race. It was 1 of the best 3 races in my career.”

After an inconsistent first half of the 2015 season, Lorenzo is pleased to have started 2016 on a better note.

“It’s very important to start in the podium in the first race,” he says. “In the last two years in 2014 I crashed and get zero points so for me it was a terrible start. You don’t have the same quietness. Then last year I finished off the podium. To start winning is the perfect way and gives you more confidence. You be more calm because you have some advantage of points over the other riders.”