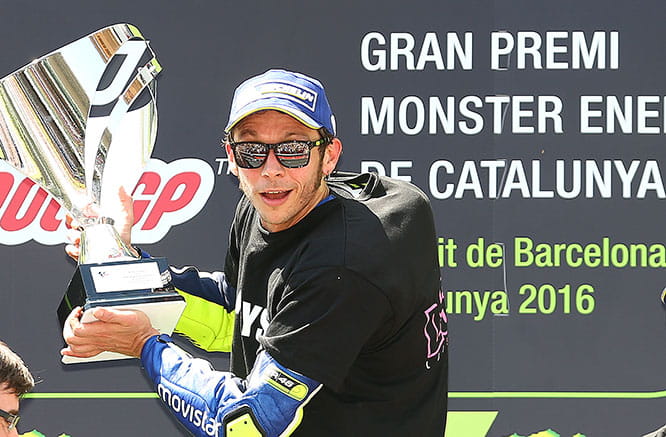 Valentino Rossi headed off the challenges of Marc Marquez to take a victory in the Catalunyan seventh round to blow wide open the chase for the world MotoGP crown.

It was an amazing ride by the nine times title winner as he fought hard in the closing stages to take his second win of the season which, coupled with the demise of his Movistar Yamaha team-mate Jorge Lorenzo, brings him right back into contention for the crown.

The race, one of the most exciting of the season, lifted everyone’s spirits after the tragic accident of Friday’s Moto2 practice session, which cost the life of Luis Salom, and the young Spaniard was on the minds of everyone, with Rossi dedicating his victory to him.

And, poigniantly, Rossi and Marquez shook hands, seemingly bringing to an end the feud between them after the war of words and action of last season.

In the aftermath of the Salom incident, the circuit configuration was switched to the slower one used by Formula One cars, and Marquez took pole for Repsol Honda ahead of Lorenzo, while Rossi started from the middle of the front row, and made a poor job of that, getting boxed in and running sixth on the opening lap.

Lorenzo made the break with Marquez and his team-mate Dani Pedrosa tucked in behind him but the gathering force of Rossi was soon giving them problems and the Italian was third on the second lap, second on the sixth and then next time around he had taken the lead from Lorenzo.

Marquez attacked reigning champion Lorenzo, taking second from him, then Pedrosa nosed through as did Suzuki’s Maverick Vinales. Lorenzo was now fifth and under attack from Andrea Iannone who at two thirds distance was running too hot under hard braking as he tried to take the inside line, losing his Ducati and taking out the angry Lorenzo.

Rossi had the edge but Marquez was giving nothing, closing in and setting up a dramatic finale with the lead changing five times in as many laps but Rossi found that little bit extra to take the victory about which he enthused: “I was in front a lot, pushing a lot, but did not have enough gap over Marc and I was worried because I knew that he would come at me. He did at the end, I try again, and get back for this win which is one of the best in my career – it is for Luis Salom and his family.” 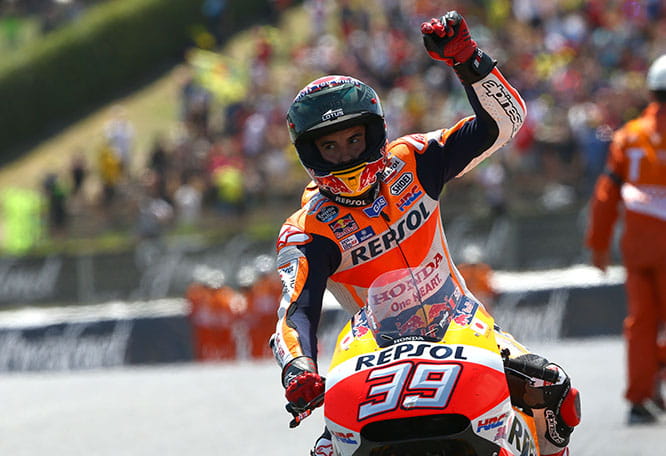 Marquez was content with second admitting: “I was at the limit, and having seen Jorge crash, and having that great battle with Valentino but I am leading the championship.”  He is 125-115 points up on Lorenzo with Rossi in third place on 103 points. After the race, Marquez (above) paid tribute to the fallen Salom, transposing his own race number 93, to the Spaniard's 39.

Pedrosa ran third in the race, ahead of Vinales, Pol Espargaro and Britain's Cal Crutchlow, while Eugene Laverty finished 13th. Scott Redding dropped back with a problem in the closing stages, crossing the line out of the points in a distant 16th, while Bradley Smith was an early retirement with transmission problems on his Yamaha YZR-M1.

Reigning Moto2 champion Johann Zarco beat off Alex Rins though for the Spaniard was fine as it took him into an eight points lead in the title stakes over Alex Lowes who finished sixth. And in Moto3 Jorge Navarro took his first victory, just ahead of the series leader Brad Binder.