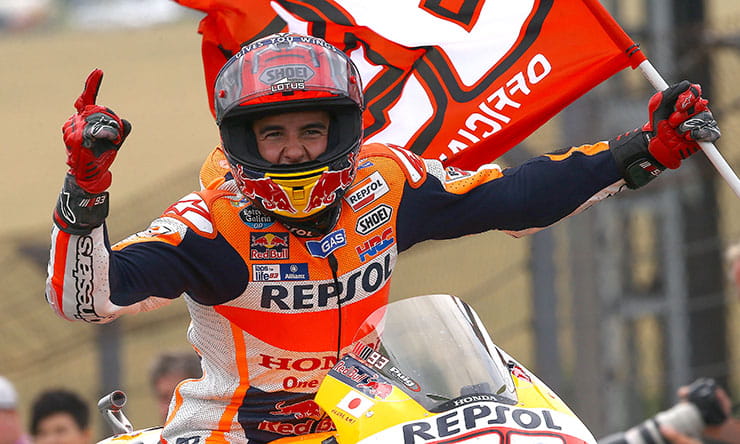 Marc Marquez pulled off a sensational ride to come from 14th place to maintain his perfect record of four German Grand Prix wins, taking an early gamble to switch to slicks on a wet-but-drying track.

Following morning downpours that saw the Moto3 and Moto2 races take place in sodden conditions, the rain abated just ahead of the main MotoGP race, with the riders on wet weather tyres.

The early part of the race saw Pramac Ducati’s wet weather specialist Danilo Petrucci battling for the lead with Valentino Rossi and Andrea Dovizioso. Petrucci crashed out of the lead on lap 11, his bike spectacularly going on fire after he managed to nurse it back to the pits.

Marquez, languishing over 14 seconds off the lead in ninth place, dived into the pits to take on slicks at the end of lap 17. It proved to be a masterstroke from the Spaniard and his Repsol Honda team, as he started to carve out over five seconds a lap from the leaders.

With the track drying, it proved a race of intrigue rather than excitement. Up front, Dovizioso gave up the lead to Assen winner Jack Miller, the pair trying in vain to make their wet weather tyres last the distance, while behind them Brits Cal Crutchlow and Scott Redding put in storming rides. 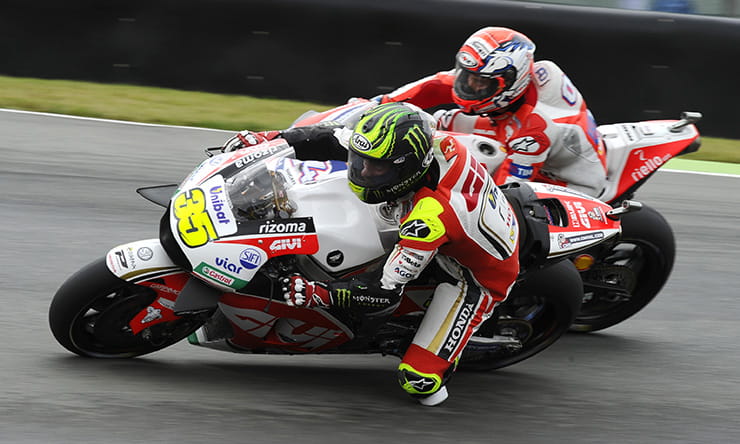 It set up a grandstand finish for the podium places. Crutchlow slipped into second on the penultimate lap, with Redding agonisingly close to making it two Brits on the podium. Unfortunately for the Pramac Ducati man, his intermediates were no match for Dovizioso’s slicks, the Italian taking the final podium slot in the final few corners.

Making a great day even better for Marquez, his main title rivals had a nightmare at Sachsenring. Rossi again failed to make the most of a mixed condition race, pitting later than Marquez and picking intermediates rather than slicks. He finished eighth but it was even worse for Movistar Yamaha team-mate Jorge Lorenzo. Wet or dry, the world champion was off the pace all weekend and came home to collect just one world championship point for 15th place.

Speaking after the race, Marquez said: “At a certain point today, I thought my run at this circuit was going to come to an end, but in the end we succeeded and earned a very good result, especially considering how Valentino [Rossi] and Jorge [Lorenzo] finished the race. I’m very happy with how we worked with the team today: they did a great job preparing my bike after my crash in the warm-up, and then in the race our strategy proved to be perfect. It was a very difficult race, with it being flag-to-flag and the track conditions so delicate. In the first part of the race, in the wet, I found things a little difficult. I had picked the wrong front tyre for my riding style, but I was able to switch to slicks. I was very careful in the opening laps after changing bikes, because the dry line was very narrow and there was still a lot of water on the surface. It’s always very difficult to decide when to change bikes, and perhaps we made our switch very early—I think I was the second rider to do so—but I decided to take a chance and it went well. We end the first half of the season with our homework done and off the back of a good race, but we must not forget to prepare well for the second half of the year.”

Father-to-be Crutchlow was understandably delighted to take his first podium of the season, saying: “It was so difficult to manage at the start, but we tried our very best as always. I think I’m one of the strongest guys in these conditions, and I have been one of the strongest all weekend, I just needed to do it in the race, and I managed to do it.

“I should have come into the pits earlier, but I didn’t see my pit board, so I came in with Rossi and Dovizioso because they were leading. It was a case of settling for a possible podium or staying with the leaders, and I chose that.

“I also missed my wife Lucy this weekend, it’s only the second race she’s missed in nine years, but she is set to give birth just before the next grand prix in Austria, so I can’t wait for that now.”

In the championship, Marquez now has a 48 point advantage over Lorenzo, with Rossi a further 11 behind in third. The championship now takes a month long summer break, resuming with the new Austrian Grand Prix, at the Red Bull Ring, on August 14.