Super Sunday for Brits as Crutchlow and McPhee victorious in Brno 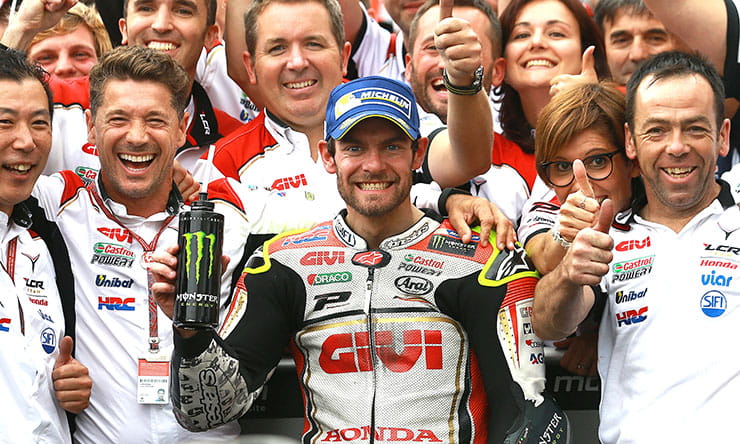 Cal Crutchlow has become the first British rider to win a MotoGP race after a majestic performance at a wet Czech Grand Prix in Brno today, while John McPhee gave the Brits even more reason to cheer after taking his maiden GP victory with an equally impressive display in Moto3.

In a race determined by tyre choices, 30-year-old Crutchlow and his LCR Honda team (above) made the decision to use the harder wet weather tyre option, when the majority of the grid went for the faster but less durable soft alternative.

The opening laps saw Crutchlow, along with fellow hard option runner Valentino Rossi, running towards the back of the field as the Ducatis of Andrea Iannone, Andrea Dovizioso and Scott Redding looked to run away at the front.

With the rain that had drenched the circuit abating before the start of the 22 lap race, most teams had expected the surface to dry enough for a ‘flag-to-flag’ situation to occur, where the riders switch to slick tyres during the race.

However, the track never dried sufficiently to switch bikes and the riders on the soft rubber option run into front tyre troubles. Dovizioso was the first to suffer, pulling in with a destroyed front tyre on the ninth lap, while Crutchlow simultaneously hit his stride and started cutting through the field.

Crutchlow hit the front on lap 16 and never looked back, winning by 7.3seconds from Rossi, who had chosen a hard rear but soft front. Early race leader Marc Marquez put in a remarkable performance on his Repsol Honda to finish third on the softer option. Loris Baz, another to choose the hard option, was fourth, while Iannone and Redding dropped through the pack to finish eighth and 15th respectively.

The win makes Crutchlow the first British rider to win a premier class Grand Prix since Barry Sheene was victorious in the 1981 Swedish Grand Prix. Speaking after the race, he said: “We made the right tyre choice and as far as I am concerned the others are wimps. If you go for one (hard tyre) why not go for both?

“I expected a different feeling (after winning) but I became a dad a few weeks ago and that’s still the best present. I’m so pleased for my team, who have worked hard and were here until midnight after I wrecked a bike yesterday. I was struggling in the first few laps as I couldn’t get heat into the tyres. I was running around with Vale, although I also had the hard front, which was more dangerous, as you use the front a lot around here, but when the tyre came in I just had so much grip and it was like I was just playing with them (the other riders).

“I’m pleased to be the Brit to get the win, especially after all the stick I’ve had and everyone saying that the others were better than me. We’ve had some crashes this year but I didn’t crash today and I won the race!”

With Jorge Lorenzo having another wet weather nightmare, finishing a lap down and out of the points after two pit stops, Rossi moves up to second in the championship – 53 points adrift of Marquez and six ahead of Lorenzo.

“I’m very happy for Cal because he is one of the best guys in MotoGP,” said Rossi. “He is good fun and when you get one victory in MotoGP you step up a level, so I am pleased for him and his family.

“In the first few laps I was not worried, I was desperate because I thought that I had made a mistake with the tyre choice. I had a good setting from the warm up but had no grip at the rear in the race. As the race went on the grip became better and better and it was good fun. I’m happy because we did make the right choice as you could see from the Yamaha riders who went with the soft option.” 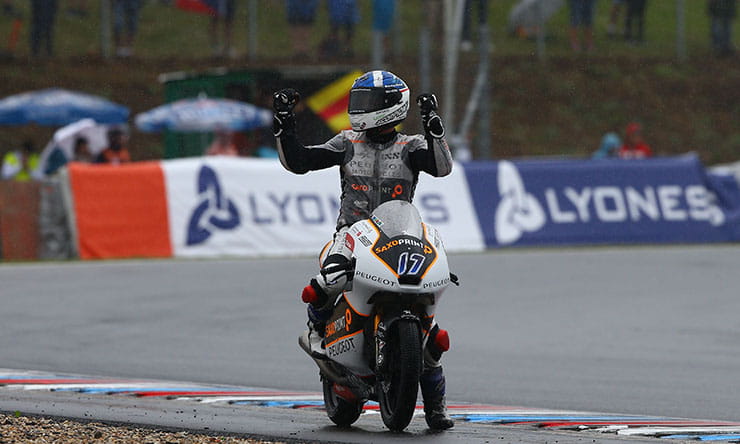 Earlier in the day, McPhee (above) put in an impressive display to win the Moto3 race on his Peugeot-branded Mahindra. The Scot, who has endured a tough season through mechanical issues, worked his way through the field and hit the front when championship leader Brad Binder crashed his KTM on lap 15 of 19. The Oban-based rider then saved a near highside to win by almost nine seconds.

“It’s still not sunk in,” McPhee said after the race. “It’s the dream that you work towards and I haven’t been able to imagine it in the last few races. Yesterday, in the dry, we brought things together and when I saw the forecast I thought that we could do it today. The bike is improving every race and although we are still a bit down on power we have made lots of improvements to the chassis.

“I didn’t really know that I had such a big lead as my screen was a bit misted and I was misreading my pitboard. It said ‘+12' but I thought it was ‘+1.2’. After the race you just think about the people that have helped you and kept faith with you, my parents, Mark Keen (crew chief) and Racing Steps Foundation, but I sat in the truck afterwards and the tears just flooded out!”

Completing a good day for the Brits, Sam Lowes finished third in Moto2 to consolidate third in the championship, with Danny Kent seventh in the race.

In the Red Bull MotoGP Rookies Cup, Bike Social backed Rory Skinner narrowly missed out on a podium despite a brave last corner move. The 14-year-old finished fourth in today’s race to move up to sixth in the championship.