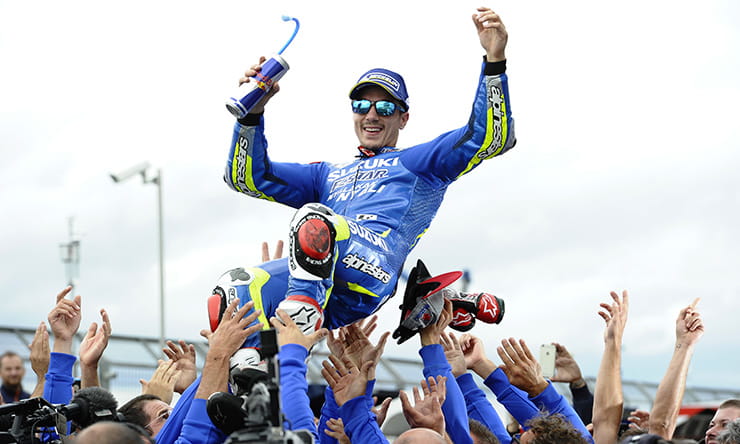 Maverick Vinales took his maiden Grand Prix win, and Suzuki’s first since 2007, as Cal Crutchlow continued his spectacular run of form to take second at the British Grand Prix.

Spaniard Vinales, who will leave Suzuki to join Valentino Rossi at Yamaha next year, rode an impeccable race after taking the lead on the opening lap and extending his advantage to win by over three seconds, becoming the third first time winner in as many races.

Crutchlow proved that his first win, in Brno two weeks earlier, was no fluke with impressive performances in the wet and dry. The Coventry-born 30-year-old took a stunning pole position, a second faster than closest rival Rossi in soaking wet conditions, and proved to be equally at home in the dry as he starred in the six-way battle for second, which also featured Rossi, Marc Marquez, Dani Pedrosa, Andrea Iannone and Andrea Dovizioso.

Iannone was the only one of the six not to make it to the flag as he crashed out of second on lap 14 of the 19 lap race, while Marquez and Rossi enjoyed a fierce battle saw the pair banging fairings and swapping places throughout the race.

That let Crutchlow, running a new frame that had previously been tested and discarded by Repsol Honda duo Marquez and Pedrosa, pull out a small gap in second, but Marquez wasn’t finished and turned his strong arm tactics to the Brit. 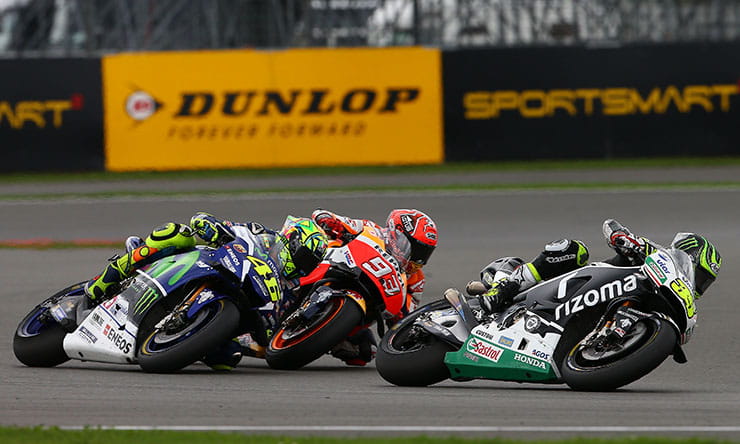 Crutchlow was not to be intimidated and Marquez’ challenge for the podium came undone with two laps to go, when he clipped the Brit under braking and ran wide, giving third position to the evergreen Rossi.

Speaking after the race, 21-year-old Vinales, who took Suzuki’s first dry weather win in the four-stroke MotoGP era said: “It feels incredible. What I have fought for all the time has now come true. The team worked so much and the lap times were so good. I came to this weekend thinking that I could win as my bike was on a really good level and I have done well at Silverstone in the past. We pushed from the first lap to the end and this is a dream that has come true. I hope that we can stay at this level and that I can give more results like this to Suzuki.”

Crutchlow, who has taken podium finishes in three of his last four races, was delighted to take second in his home Grand Prix. He said: “It was a long race but good fun to be battleing with the guys at the front. I think that we deserved that result and the fans deserved it too. They’ve backed me through thick and thin over the years, most of the time I’ve been in the hospital so to be on the podium is fantastic for them.

“Pole position and a second place? I will take that all day long. I didn’t expect to be on the podium today. I expected to be top six, so to battle with these guys for the full race distance was good. With three laps to go I though ‘do not put this on the floor’ and I controlled it at the end as I knew I had a good enough gap.

“I used new chassis today and although the lap time was the same between it and the bike I had been using, I just felt a little more comfortable on it.”

It was a mixed weekend for the other home riders. Eugene Laverty, starting sixth after a brilliant qualifying, made a sensational start to run as high as second, however the race was red flagged due to a high-speed accident involving Pol Espargaro and Loris Baz. The restart saw the Ulsterman rear-ended by Stefan Bradl’s Aprilia but he fought back from out of the points to finish 12th.

Scott Redding had his worst ever British Grand Prix, crashing twice but remounting both times. He kept going though, but was not rewarded with any points, finishing 17th.

It was a good day for Alex Lowes on his MotoGP debut. Standing in for the injured Bradley Smith, the rode a mature race to score three points for 13th. Earlier in the day, he had been punted out of the battle for the lead in the Moto2 race by Johann Zarco.