Rossi: “I will only continue if I can fight for important positions”

Valentino Rossi has emphasised the importance of the 2016 MotoGP season in deciding on his future in Grand Prix motorcycle racing.

Speaking to journalists in Sepang, Rossi said the first part of this season, including testing, will be important when it comes to deciding whether he’ll continue racing beyond 2016.

While the Italian says he wants to continue, he will only do so if he can fight at the front.

Sitting second fastest after the first official test in Sepang, Rossi is happy with his results so far but acknowledges there is still work to be done if he’s to challenge team-mate Jorge Lorenzo.

“Like in 2014, the test and the first part of the season will be very important for me for understanding if I have enough potential to continue, so it is good to be second here,” he said.

“I’m happy because I want to continue but will only continue if I am able to fight for the important positions.

“I’m happy about the test because first of all we did a good job, tried a lot of different stuff and I think we can give some good information to improve the bike. Also, I got a good time, which is not so bad, I think we can work and do better but anyway I am in second place so this is not so bad. In the end it was a good test.” 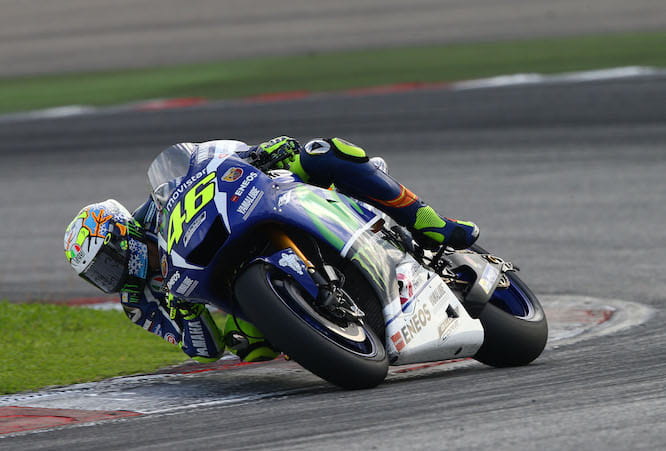 Jorge Lorenzo set the pace of the test, ending the three days almost a second faster than Rossi, but the Italian reckons he was doing much more of the ‘dirty work’ than his team-mate.

“He feels very good with the tyres, and the bike and he rides more at the limit and better,” Rossi said. “But it is just the first test. Sincerely, I did a lot of dirty work compared to him. He concentrated more on performance but anyway his lap time is impressive. We have to understand the way to get closer.”

Rossi spent the three days testing two different variations of the YZR-M1. A 2016 model based closely on the bike with which he and Lorenzo fought for the 2015 world title, and a more radical 2016 M1 featuring a number of changes including a longer, unconventional fuel tank.

The nine-time world champion was unsure on the more radical version on the first day, but says it came better during the test. Nevertheless, it’s still not certain which bike they will proceed with and plan further comparisons at Phillip Island.

“The question mark that remains is from the bike,” he explained. “More 2015 or 2016, we will try again in Phillip Island. The new one was not so bad at the end.”