Marc Marquez: "We must improve a lot" 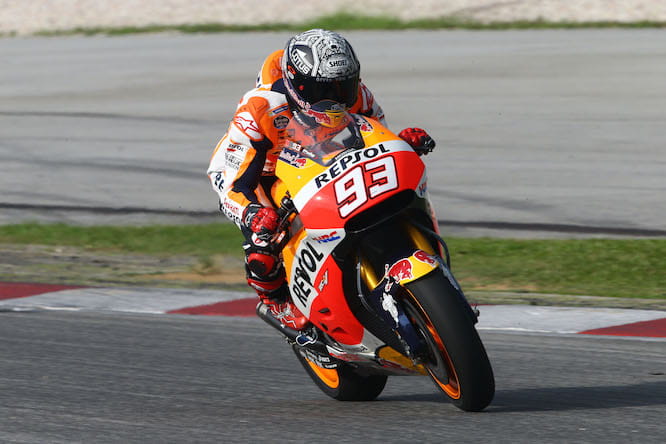 Marc Marquez has said Honda must improve after the latest iteration of the RC213V motor continues to display the overly-aggressive characteristics that plagued him during the 2015 season.

The Spaniard ended the first day of testing in Sepang seventh fastest, some 1.5 seconds off the pace set by reigning world champion Jorge Lorenzo.

The continued problems come in spite of Honda taking a revised engine specification to Sepang with Marquez saying any improvement from the new motor is ‘very small’.

“We are still far from the best lap time, far from Jorge so we must work a lot to try to find a good rhythm and concentrate on set-up,” said Marquez.

“Maybe Jorge is too far. Valentino is closer to us and he is second. We expect a little bit of a gap as we need to take time to work with the electronics and the feeling with the tyres. I didn’t have a big problem with the tyres but with the electronics and the character of the engine, I didn’t feel comfortable and for that reason today was a difficult day. We try to work and try to push and we must improve a lot.”

The area in which Honda are struggling most is under acceleration on corner exit, something that may have been amplified by the introduction of the Magnetti Marelli-spec electronics, which Honda have limited experience with.

“We had the 2016 engine that we tried in Valencia and Jerez but we also tried the 2016 engine with some modifications,” Marquez continued. “It was slightly better in some points but we still have a lot of work to do to try to improve, especially in acceleration. We are trying to fix all the aspects but at the moment where we must concentrate is on the electronic side.”

“The newer engine is the same engine but had small modifications inside, it was a very small improvement on the connection with the gas so we must keep working to try to find better acceleration as that is where we are losing it.”

Things were slightly more positive for Dani Pedrosa, who placed third fastest with a time just over a second slower than Lorenzo.