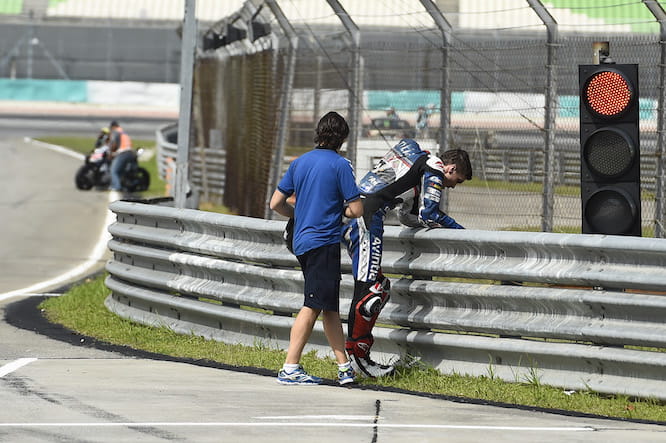 Loris Baz has escaped serious injury after a 180mph horror crash during the second day of testing in Sepang.

The Frenchman’s Ducati GP14.2 appeared to fall apart half way down the main straight in the early hours of today’s testing. With remnants of Baz’ bike and tyre scattered down the main straight, and the cause of the crash unknown, the the red flag was drawn bringing the session to a halt for over an hour.

Baz miraculously walked away from the incident and later tweeted: “What do you say when you walk away from a 290kph crash with a bruised elbow? Big thanks to Alpinestars!” 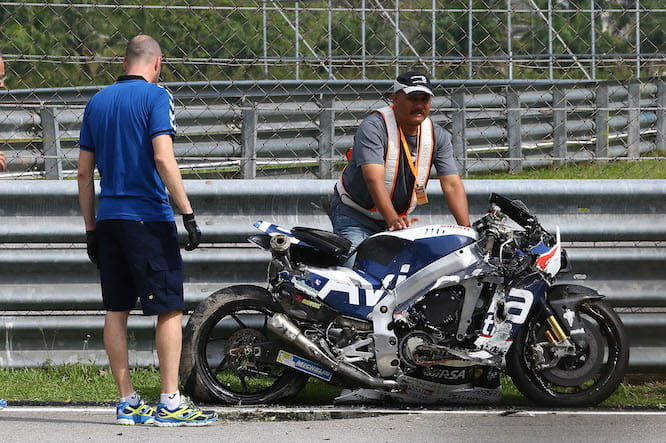 While the cause of the incident is yet to be revealed; journalist Manuel Pecino has said the team have refuted claims there were any mechanical problems such as the rear suspension collapsing or engine seizure.

With post-crash pictures showing a large split in the rear tyre, Michelin have withdrawn the soft-option tyre from use at the test until the cause of the crash is determined.

This has resulted in little track action since the incident with temperatures rising and only the hard option tyre available. Just a handful of riders have ventured out on the hard tyre, with times remaining as they were this morning.

Danilo Petrucci continues to lead the way ahead of Baz’ team mate, Hector Barbera and Jorge Lorenzo, who also took a small tumble this morning.