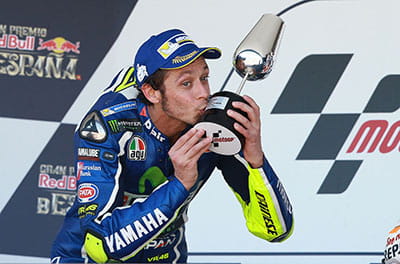 Valentino Rossi romped to victory in the Spanish round of MotoGP as he delivered a masterclass at Jerez, charging into the distance ahead of his Movistar Yamaha team-mate Jorge Lorenzo while Repsol Honda’s series leader Marc Marquez trailed in a distant third.

Rossi, chasing a tenth world title in a long and illustrious career, had taken his first pole start at this circuit since 2005, and he used it to good effect, making the perfect get-away and then, apart from a brief moment on the second lap when Lorenzo nosed ahead, leading all of the way, at one point pulling out an advantage of over four seconds.

Rossi, setting the fastest lap of the race, was always in control as he scorched in his first victory of the season, taking the flag 2.386secs ahead of a dejected reigning champion Lorenzo who had no answer to the pace of the Italian.

“For me this was the perfect weekend, we have been fast always. On Friday we work very well, the bike is fantastic – I had good pace, a good start and was able to push,” said Rossi while Lorenzo reflected on tyre issues: “In the middle of the race I could keep the distance  but then I had the tyre spinning and I lost a lot which was a pity as I had felt very strong.”

Marquez settled for a strong, if distant, third place, maintaining his series lead, though now reduced to 83-65 over Lorenzo with Rossi closing in on them on 58 points in third overall.

Dani Pedrosa ran fourth in the race ahead of the Suzuki duo of Aleix Espargaro and Maverick Vinales with Andrea Iannone seventh for Ducati ahead of Monster Tech3 Yamaha’s Pol Espargaro with Ireland's Eugene Laverty ninth. Cal Crutchlow was top Brit, 11th on the LCR Honda, with Bradley Smith 12th and Scott Redding a disappointing 19th on what was a weekend to forget for the Pramac Ducati rider.

There was some good news for the Brits though. Sam Lowes extended his lead in the Moto2 title chase as he charged to his first victory of the season, having led virtually all of the way with a consistent rider that ended the challenges of Jonas Folger who had snatched the early initiative. 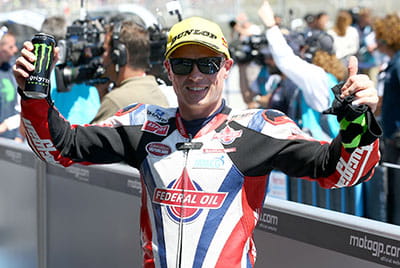 Pole-starter Lowes was soon in charge and from that moment, the result was hardly in doubt as he dictated terms from the front to take the victory by a couple of seconds from the German rider and one that puts him 10 points clear of title rival Alex Rins who finished the race in third place.

Brad Binder charged through from zero to hero to take his maiden victory in the Moto3 series and stretch his lead in the title chase.  He had to start from the back of the grid after a breach of technical regulations saw his qualifying times wiped out.

Behind him Nicolo Bulega won a last lap three way scrap to take second ahead of Francesco Bagnaia with Jorge Navarro who had led the action for long periods eased back into fourth place, a result that leaves him 15 points down on Binder.