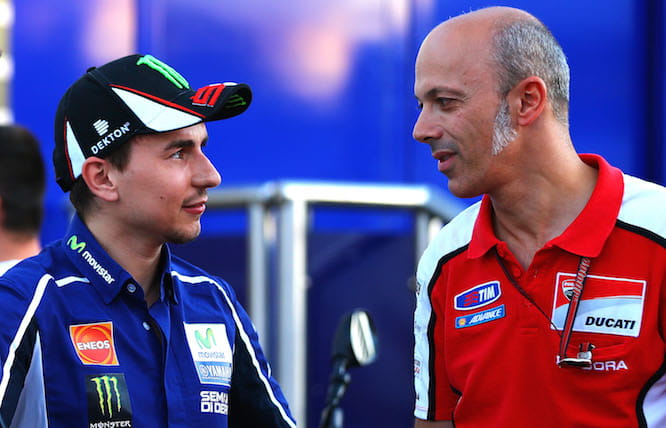 Jorge Lorenzo will leave Yamaha at the end of the 2016 MotoGP season in favour of a big-money move to Ducati.

The Spaniard has long been linked to the Bologna factory but it’s not until now that official confirmation has arrived from both Yamaha and Ducati.

Earlier this year in Qatar, Yamaha boss Lin Jarvis confirmed they’d made Lorenzo a lucrative offer to continue in the Movistar Yamaha squad alongside Valentino Rossi but the three-time MotoGP World Champion had opted against signing.

It’s rumoured his Ducati deal could be worth up to £15 million a year but the Spaniard has other motivations to leave Yamaha, including the potential of achieving what arch-nemesis Valentino Rossi couldn’t do by winning on the Desmosedici.

While no official statement from Lorenzo is expected, he will speak in the press conference at Jerez this Thursday, although it’s not expected he’ll go into much detail with Yamaha likely to forbid him from speaking about the move until his contract expires on December 31st. Jarvis will also be present to address the world’s press.

Lorenzo joins Valentino Rossi and Bradley Smith in having announced their plans for 2017, with Rossi staying at Yamaha for another two years as Smith joins the factory KTM team.

It's not yet known who will replace Lorenzo at Yamaha or who he'll partner at Ducati. Smart money is on Maverick Vinales to join Rossi at Yamaha but it's reported Suzuki are looking at exercising a clause in his contract forcing him to stay put for another year.

At the start of the season it looked as though it'd be Andrea Dovizioso making room for Lorenzo at Ducati, but following Iannone's lacklustre start to the season - including taking out his team-mate on the last lap of the Argentinian Grand Prix - it's thought Ducati bosses are still considering their options.

Ducati announces that it has reached an agreement with Jorge Lorenzo whereby the Spaniard will compete in the MotoGP World Championship in 2017 and 2018 on the Ducati Desmosedici GP Ducati Team.
Lorenzo was born in Palma de Mallorca 4 May 1987, in his sporting career he won five championship titles in MotoGP (250cc in 2006 and 2007 and in MotoGP in 2010, 2012 and 2015).

"Ducati announces that it has reached an agreement with Jorge Lorenzo whereby the Spaniard will compete in the MotoGP World Championship in 2017 and 2018 on the Ducati Desmosedici GP Ducati Team.Lorenzo was born in Palma de Mallorca 4 May 1987, in his sporting career he won five championship titles in MotoGP (250cc in 2006 and 2007 and in MotoGP in 2010, 2012 and 2015)."

"Yamaha Motor Co., Ltd. announces that its partnership with Jorge Lorenzo will be discontinued at the close of the 2016 MotoGP season, when Lorenzo will move on to new racing challenges.

Since Lorenzo joined the Yamaha Factory Racing Team in 2008, Lorenzo and Yamaha won three MotoGP World Championships (2010, 2012 and 2015), clinched 41 race wins and have been on the podium 99 times out of 141 races contested.

Yamaha is extremely grateful for Jorge's contributions to its racing successes and looks forward to sharing more memorable moments during the remaining 15 MotoGP rounds of 2016, their ninth season together.

Having already reconfirmed Valentino Rossi for 2017-18, Yamaha will announce the future  Movistar Yamaha MotoGP team riders‘ line-up in due course after securing the services of the second rider."