Marquez fastest as MotoGP 2016 gets underway 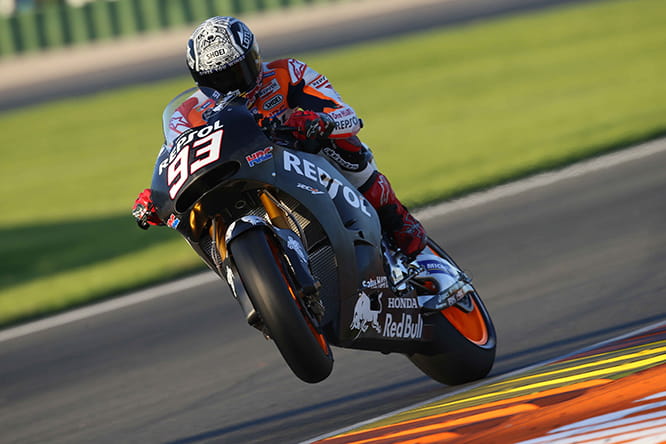 The 2016 MotoGP season got underway in Valencia today as riders headed out for the first time on their new machines.

The test also marked the beginning of Michelin’s role as spec tyre supplier, with riders able to talk about the new rubber for the first time despite having tested the tyres at a number of points across the season

With spec electronics software set to be rolled out across the board next year, some riders tested out the new kit while many opted to remain with their existing ECU and focus on learning the Michelin tyres

It was a tough day for some with multiple crashes across the board, with some riders even heading into the kitty litter twice. Marc Marquez was the first to be caught out on his fourth lap of the day but he wasn’t to be the last. 11 other riders crashed, including Cal Crutchlow, Pol Espargaro, Aleix Espargaro, Eugene Laverty, Maverick Vinales, Alvaro Bautista, Stefan Bradl, Jack Miller, Tito Rabat and Andrea Iannone.

All 13 crashes saw the front end wipe away just as riders got on the throttle.

Marquez topped the timesheet with a 1’35.551, just two tenths from the fastest lap of Sundays race, ahead of the Ducati of Iannone who was just 0.088sec behind the Spanish rider.

Dani Pedrosa rounded out the top three just a tenth behind his team-mate with Vinales fourth fastest on the Ecstar Suzuki. 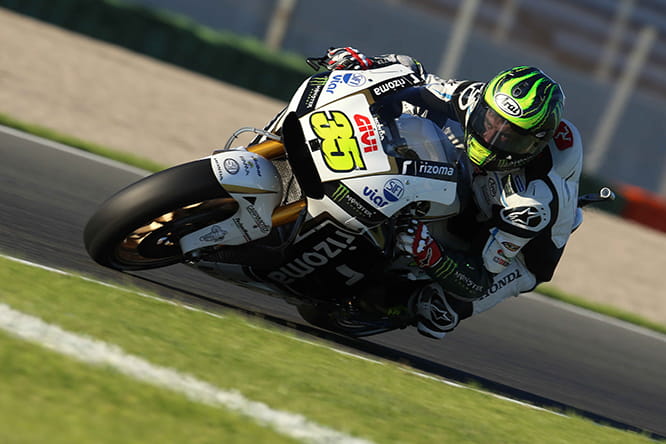 Jorge Lorenzo, who spent time on both the 2015 and 2016 YZR-M1, was fifth fastest ahead of LCR Honda’s Crutchlow and the leading Tech 3 Yamaha of Pol Espargaro.

Bradley Smith posted a time just 0.060sec slower than his team-mate to place eighth ahead of Aleix Espargaro and Andrea Dovizioso.

Scott Redding got off to a strong start with the Pramac Ducati team, setting the eleventh fastest time of the day ahead of nine-times world champion Valentino Rossi.

Aspar’s Eugene Laverty enjoyed his first run out on the Desmosedici GP14.2 but placed last of the 21 regular MotoGP riders after crashing twice. 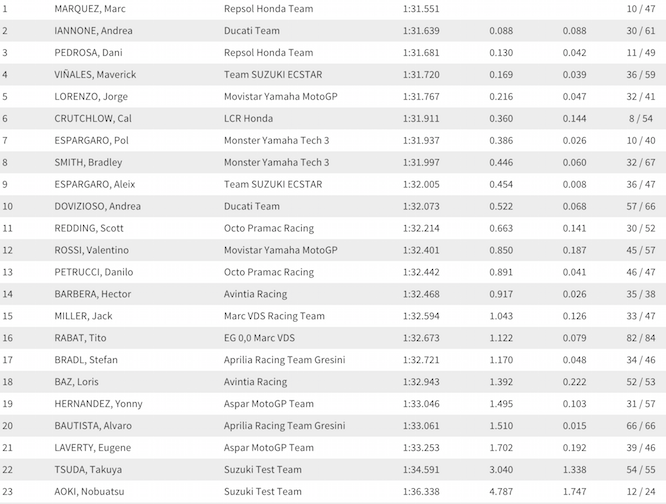