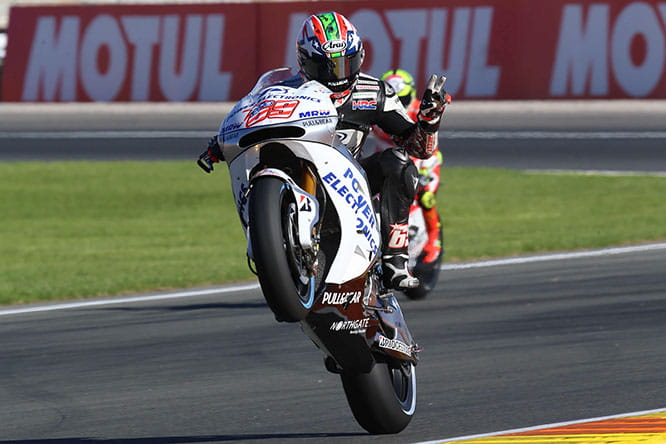 The American made 216 MotoGP race starts in his illustrious career which started all the way back in 2003.

Hayden only won two races in that time, but sheer consistency led him to 28 GP podiums and saw him famously beat Valentino Rossi to the 2006 World Championship.

The 34-year-old moved to Ducati after six years with the Repsol Honda team, where he spent five years aboard the Desmosedici before a serious wrist injury resulted in him losing his space in the squad, moving to the ‘Open’ class for the final two years of his career with a return to Honda.

Hayden struggled on the largely uncompetitive open class Honda bikes, meaning his final two years in the Grand Prix paddock were tough but he’s now hoping for a new lease of life as he moves to the Superbike World Championship with the ten Kate Honda outfit. ]

“For 13 years it was eat, breathe and sleep MotoGP. It’s been an amazing ride,” said Hayden talking to journalists at Valencia. “Of course these last two years have been tough, but I’ve enjoyed every minute of it, worked with some great teams and rode some great bikes.

“It’s really fitting to do it here at Valencia. This is the track I came to watch at in 2002. I stood out there and – wow! It was my first European GP and it was a big shock just how professional everything was and the size of the crowd. I realised then I was in the big league and better get it together quick for the next year.

“That first year was tough, but also in Valencia I got the Rookie of the Year title, was able to beat the 250cc champion and World Superbike Champion and runner-up, which was pretty special. Then to get the crown here in 2006 was obviously the highlight of my career and something really special for me and my family.

“I’d just like to thank everybody who has supported me through it all, my teams and my family, I appreciate it all. I think MotoGP – as much as the last weeks have been a little negative – is in a great place. The sport is bigger and better than ever, the tracks are safer and the young talent keeps getting younger and faster. So the future is bright.”