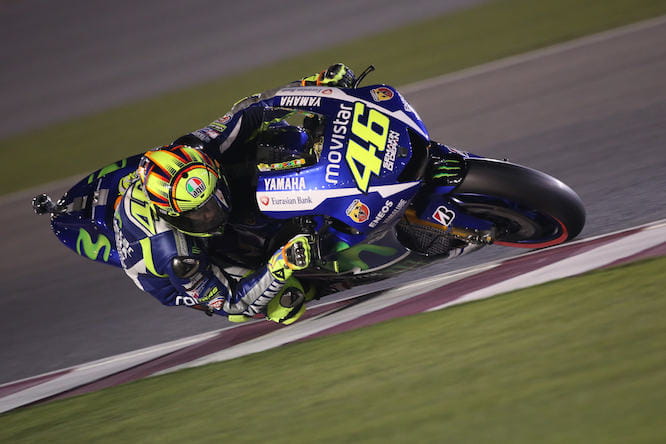 Valentino Rossi took victory in Qatar this evening after coming out on top of an incredible battle with Ducati's Andrea Dovizioso.

Dovizioso took the holeshot as drama struck on the first corner with Marc Marquez running wide leaving him dead last.

Lorenzo settled into second behind Dovizioso with Iannone in third. Hernandez sat fourth after the first few corners as Britain’s Bradley Smith settled into fifth.

Lorenzo barged up the inside of Dovizioso on the second lap to take the lead. Pedrosa, who had dropped back to eighth place on the opening lap, made his way through the field to scrap with Rossi for sixth on lap four. Keen to avoid the Honda, the Yamaha man made his move on Yonny Hernandez and moved into fourth. Meanwhile, Marquez’ fought through from the back to ninth in just three laps.

After passing Hernandez, Rossi appeared to find his rhythm and began to close in on the leading trio.

Dovizioso re-took the lead with fourteen laps remaining and immediately began to gap Lorenzo as Rossi latched onto the back of third placed Iannone. Lorenzo desperately tried to get back in front of Dovizioso but lost drive on to the main straight, losing position to Iannone. A hard move into the first corner saw him re-take second but Dovizioso remained in the lead.

The Mallorcan slipped back into the lead on the tenth lap as teammate Rossi passed Iannone for third. Having none of it, Iannone used the drive from his Ducati to get back past on the straight. Marquez moved into fifth position on lap eleven. 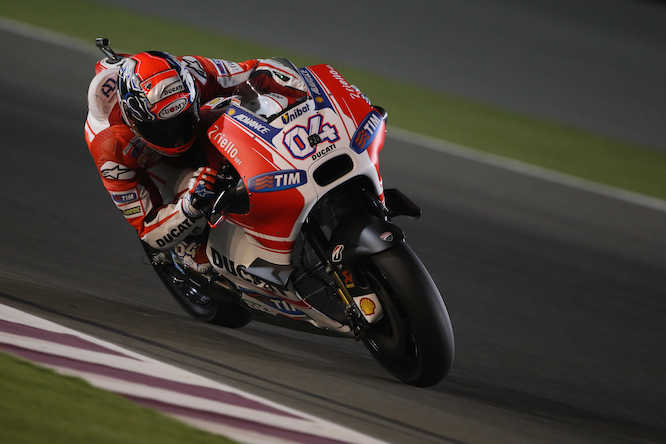 Rossi looked to make a move on Dovizioso into the last turn but once again the superior speed of the Ducati saw the Italian come out on top. It was all ding-dong at the front as Dovizioso re-took the lead with nine to go but Lorenzo fought back almost immediately.

Dovizioso bagged the lead again with five to go only to run wide on the first corner, letting Rossi through momentarily. He tried again the next lap and despite running slightly wide managed to maintain the lead as Rossi took Lorenzo for second.

Rossi moved into the lead for the first time a few corners later but Dovizioso fought back to hold his compatriot off. The Yamaha man secured the lead on lap nineteen but Dovizioso wasn’t going to give up.

Nothing separated the pair into the final lap, Rossi had a little more edge but Dovizioso knew he had the speed down the straight. However the Ducati wasn’t close enough to use the power leaving Rossi to clinch victory.

Iannone got the better of Lorenzo to complete the podium with the Repsol Honda duo of Marquez and Pedrosa in fifth and sixth respectively. Crutchlow finished seventh ahead of Bradley Smith and Pol Espargaro with Yonny Hernandez rounding out the top ten.

Aleix Espargaro took the Suzuki to eleventh ahead of Danilo Petrucci and Scott Redding with Hector Barbera and Stefan Bradl rounding out the points.