ITV to continue with MotoGP highlights 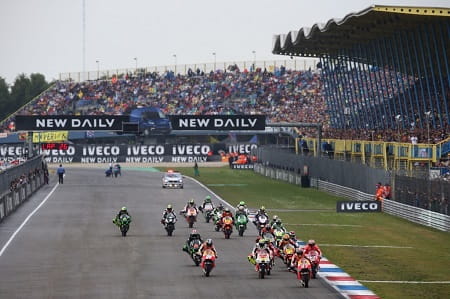 ITV has confirmed they will continue to show highlights of MotoGP races during the 2015 season. The free-to-air broadcaster agreed a deal with BT Sport last March to show one-hour highlights packages on the Monday after each race weekend.

BT Sport became the sole rights holders of MotoGP coverage in the UK from the start of the 2014 meaning fans would have to pay BT’s subscription fee to watch the action live.

ITV’s highlights package provided the many fans unable to afford BT’s £12 per month subscription with much called for lifeline.

Today the channel has confirmed to a broadcasting blogger that they will continue with a similar package for the 2015 season.

An analysis conducted by F1Broadcasting suggests the number people watching MotoGP in the UK halved in 2014, falling to an average of just 500,000 per race compared to the BBC and Eurosport’s combined figures of around one million per race.

BT Sport has said they are ‘pleased’ with viewing figures as a brand new channel and expect them to grow in time.