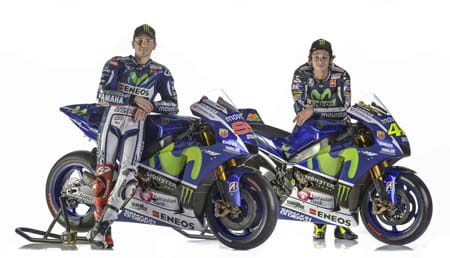 Yamaha has unveiled its 2015 MotoGP YZR-M1s at a special launch event in Madrid today. The machines, which will be piloted by team-mates Valentino Rossi and Jorge Lorenzo in the premier series this season, also have a new colour scheme and livery which includes more emphasis on the team’s title sponsor, Movistar. 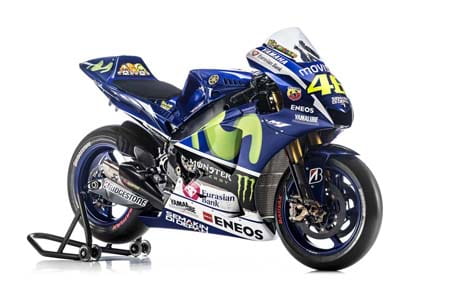 According to Lin Jarvis, the changing of the bikes’ livery for 2015 is a key indication of the strong partnership that has developed over the past year between the Yamaha team and Movistar.

“Last year we were honoured to announce our new partnership with Movistar, a brand that has a rich and strong heritage in the MotoGP championship,” he explained. “We enjoyed a really important and very positive first year together in 2014 to begin our collaboration. This year we have decided to present the new bike at the home of Movistar, at the Districto Telefonica in Madrid. From here the new season begins, and a new adventure for all of us. The “M” for Movistar on the fairings of our M1 is even bigger this year representing even greater union between us.” 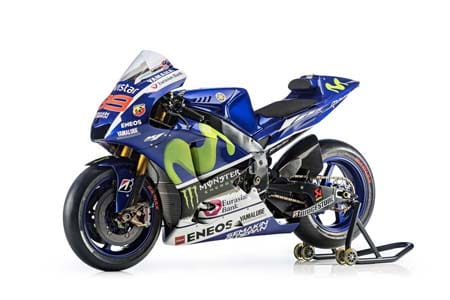 Having lost out on the MotoGP title to Honda’s Marc Marquez for the past two seasons, the formidiable duo of Rossi and Lorenzo are keen to return to the series this year as firm title contenders. Speaking about the pairing at the launch, Lin added: "You have to learn from your mistakes and to continue to develop and evolve. We have to get everything right. Everything has to be perfect from the first race. That's a difficult call, but I think our riders are well prepared and our team are well organised. We're ready to go. I think both Valentino and Jorge are in great shape physically and mentally.

"Last year Marquez had a phenomenal year, so we know the level of competition will be super-super-strong, but we have the riders we want. I'm totally confident they will go out there and be competitive and win many, many races."

The team is now heading to Malaysia for the first of the pre-season MotoGP tests on 4-6 February, before the series begins on 29 March.