MotoGP rookie Miller on taming his 260bhp Honda: "I've had a few moments!" 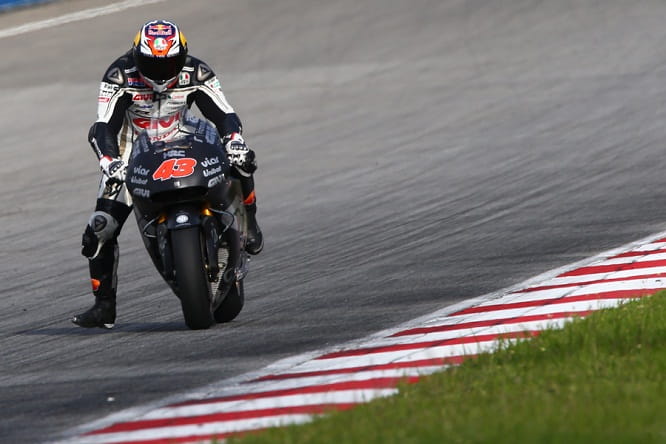 Jack Miller has said that he has learned just 10% of what he needs to ride his RC213V-RS MotoGP bike after making clear progress in the first test of 2015 at Sepang.

Miller improved significantly over the three day test, eventually posting a fastest lap of 2’01.9 – some two seconds quicker than his fastest lap set at the circuit in a test late last year. His time placed him just three seconds off fastest man Marc Marquez and within touching distance of his closest open Honda rival Nicky Hayden.

“We managed to get a faster lap in this morning before the track temperature went up,” Miller explained. “It was good considering a couple of mistakes, step by step we’re getting stronger. I did a long run and it was very physical so we’re going to have to look at training even harder. I’ve been training hard over the winter but nothing can prepare you for this, at the end of the run I was getting pretty tired.

“The lap time I did was quite good. I was alone and the next lap Rossi jumped in front of me and I felt good sitting on his arse the whole lap, but because I’m getting used to the MotoGP bike, I came into the last corner and nearly went up his arse because I braked like I would on a Moto3 bike. It’s a lot different to try and judge where the other rider is and the Honda is so good on the brakes. This bike is so different and this was the first time I had someone in front of me.” 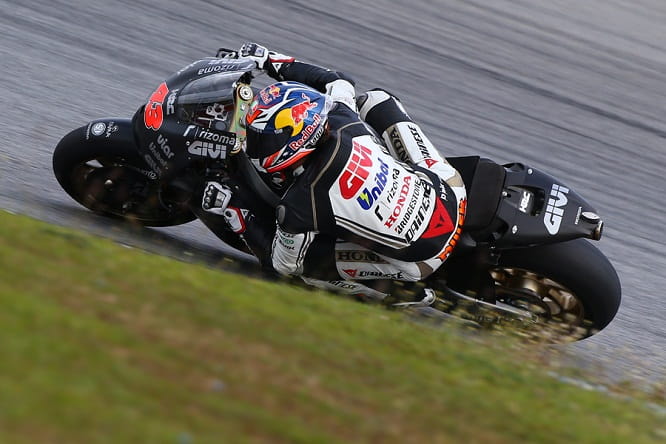 In Valencia last year Miller rode Honda’s outgoing production racer, the RCV1000R to acclimatise to the power and weight of the larger MotoGP machine. He was then given a quick run out at Sepang in December on the new RC213V-RS, which is thought to be a 2014 RC213V with Magnetti Marelli electronics. The new bike is supposed to be faster and closer to the front, but the gap to leading Open Class man Stefan Bradl on the Forward Yamaha is still uncomfortably large.

“This is our first official test on the new open bike,” Miller continued. “We are not as far away as what we expected and we are getting more and more comfortable with it. I’m starting to work out how these tyres work too.”

Stepping up to MotoGP from the lightweight Moto3 class this year, Miller has a lot to learn and when asked how it’s going he seemed positive. However, the Aussie also admits there’s still a long way to go.

“I’ve learned about 10% of the 100 I need to learn! Every time I ride the bike I get more familiar with it, more used to the brakes, the power and everything like that. The muscles that you use riding this bike are completely different to what you use for anything else in everyday life. We are making steps forward; we are two seconds quicker than we were here last year. We haven’t hit that wall yet, we’re waiting to hit it but for now we’re doing the best we can.

“We’re still struggling with a lot of spin, as soon as the track temperature goes up, we’re still running next to no traction control so it just lights up! The next test we’re going to be taking a look at the new Magnetti Marelli system and how to work with electronics but for now we’re learning how to ride a MotoGP bike old style.

“I still need to change my riding style a bit more. Towards the end I found my inside arm rolling away and you sort of fall into a Mick Doohan sort of style but that’s more trying to grip on with everything you’ve got! My style has changed considerably and still needs to to be able to pick the bike up and get out of corners.”

“I’ve had a few moments but it’s all just finding where the limit is on the front tyre. With the Bridgestone front it seems to be there and then it’s not! It’s not like anything I’ve ridden. When it goes it is gone and this isn’t an 80 kilos Moto3 bike to pick up on your knee!”