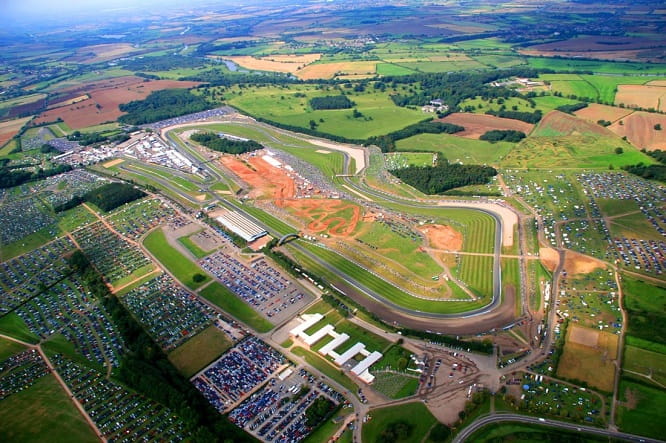 The 2015 British Grand Prix has been put in jeopardy as the relationship between Donington Park and the Circuit of Wales has been broken off just six months before the event.

Last year the Circuit of Wales signed a five-year deal to host the UK’s sole MotoGP round but with no infrastructure in place for 2015, a deal was made with Donington Park to host the event on CoW’s behalf.

It’d now seem that deal is off as the Circuit of Wales has failed to meet payment deadlines, according to a statement released by Donington Park today.

“The Board of Directors and Staff of Donington Park Racing Limited (‘DPRL’) are greatly disappointed to have to report today that the Circuit of Wales company, and its new subsidiary GP15 Limited, have as yet been unable to complete their agreement with DPRL, nor meet long planned payment deadlines, in order to set in motion the operation of the 2015 British Motorcycle Grand Prix, MotoGP™ at Donington Park,” the statement read.

“Despite DPRL’s best efforts, the time lost with CoW being unable to complete the funding arrangements has resulted in delays in almost all of the event’s critically important operational plans, from track works to equipment hire. Therefore, in the judgment of the Board of DPRL, this current position could jeopardise the safe and successful running of the 2015 British MotoGP at Donington to such an extent, that both the commercial risks and the lack of time are now too great to allow Donington to proceed. Therefore Donington Park must withdraw from any further participation. Consequently, the 2015 British round of the FIM MotoGP World Championship will not now be held at Donington Park on August 30th 2015.”

Any fans who have already bought tickets for the event need not worry. Donington has guaranteed that anyone who has purchased tickets via Donington themselves (and their agent See Tickets) will receive a full refund.

“The whole Donington team who have worked so hard here over the past six months to fulfil our part of the MotoGP planning are as disappointed as those many fans will be who wanted to see the event return to Donington Park”, said Christopher Tate, MD of Donington Park. “The position we are now in is of course frustrating and uncomfortable for all concerned.

“It is this week, way past any normal deadlines, when we - in partnership with CoW - would have been committing to major expenditures. CoW has made it clear to us that they are not now in a position to complete, so we have to withdraw and end the planned arrangement.”

The Circuit of Wales is contracted to hold a Grand Prix in the UK this year but with their funds seeming non-existent, Dorna may need to step in to find a solution. As the only viable alternative, Silverstone would seem favourite to take on the event but the biggest question is who will foot the bill?

Representatives from the Circuit of Wales commented:

The Circuit of Wales is disappointed to have been unable to reach a contractual agreement with Donington Park Racing Limited (DPRL) to host the British round of the 2015 Motorcycle Grand Prix World Championship.

After initially agreeing Heads of Terms with the board of DPRL in September 2014, both parties were subsequently unable to agree further terms to form a legal contract. Contrary to claims by DPRL that Circuit of Wales is unable to meet the funding arrangements, we are unwilling to provide the significant funding that DPRL required for the necessary track upgrades to host the British Grand Prix without a signed contractual agreement in place. We have all of the funding necessary in place to promote and host the 2015 race in the UK. All funding for the flagship Circuit of Wales regeneration development in Blaenau Gwent is on track with works due to start later this year following the outcome of the public enquiry in March.

The Circuit of Wales will continue to promote the British round of the FIM MotoGP™World Championship and is fully committed to delivering the event later this year.

Bike Social can exclusively reveal that Silverstone will host the British MotoGP in 2015 and 2016. Click here for the full story.