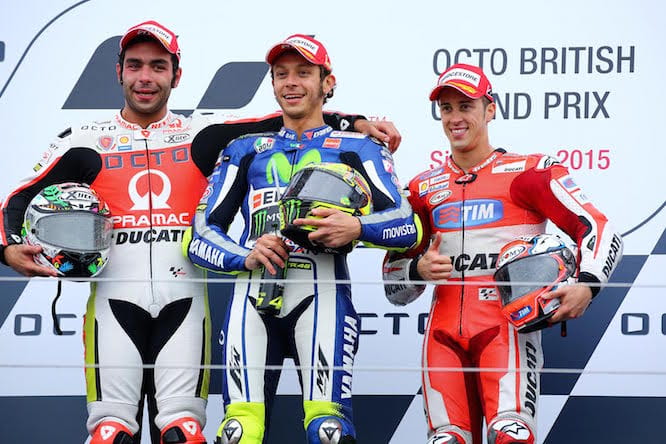 Valentino Rossi re-took the MotoGP championship lead from Jorge Lorenzo with a stunning victory at a sodden Silverstone this afternoon.

The riders had originally lined up on slicks but a downpour on the grid saw them all enter pit-lane at the end of the warm-up lap as red flags were wave to abort the start. The race was restarted 15 minutes later in fully wet conditions.

Rossi took the lead in the early stages and didn’t look back, despite Marc Marquez close on his tail for most of the race. The Italian was given a bit of breathing space as Marquez highsided out of contention at turn one, but a six second lead was later reduced to just under two by none other than Danilo Petrucci on the Pramac Ducati.

Despite a strong start, Jorge Lorenzo dropped back as the race went on, seemingly struggling with his visor misting up. He recovered some positions towards the end of the race but couldn’t make it past Andrea Dovizioso to take the final podium spot.

Cal Crutchlow enjoyed a strong start to the race, but not quite as strong as his teammate Jack Miller, who rocketed into the top ten from 16th on the grid. Sensing his chance, Miller lunged up the inside of Crutchlow into Vale with disastrous consequences, wiping the Briton out of his home Grand Prix.

Dani Pedrosa finished third ahead of Scott Redding, who enjoyed his best result of the season just hours after signing for Pramac Ducati. Bradley Smith took eighth ahead of Andrea Iannone with Aleix Espargaro and Alvaro Bautista rounding out the top ten.

Rossi’s victory sees him back ahead in the championship battle, 12 points up on Lorenzo with Marquez now 77 points behind.