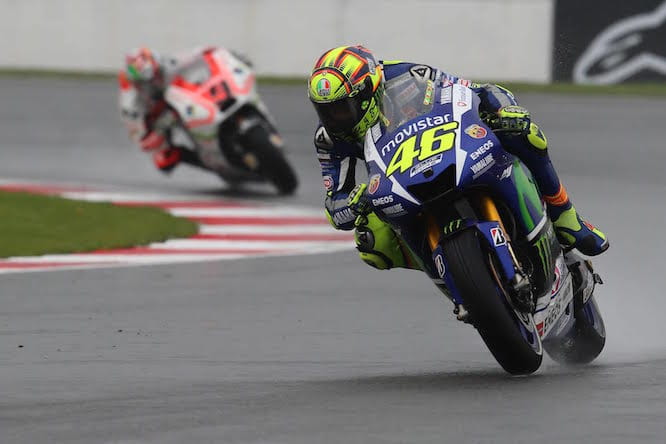 Valentino Rossi has said he is ‘proud’ of his first wet race victory in ten years after a stunning ride to take the win in today’s British Grand Prix.

Rossi took the lead from team mate Jorge Lorenzo on the third lap and didn’t look back from there, despite a hard-chasing Marc Marquez on his tail for the majority of the race.

The weather came at the right time for the Italian, who had been struggling to maintain the pace of Lorenzo and Marquez across the weekend but looked good for a wet race after topping a damp morning warm-up.

“This morning when I woke up and saw the rain, I didn't know if it was good news or not because during this season we don't have a lot of data for the wet,” said Rossi speaking after the race. “But I think the work of my team made the difference and also my Yamaha was fantastic. From the first lap in warm-up we found a good balance and I was very strong.

“On the grid I was quite scared because it was the worst conditions possible; cold, a little bit of rain, starting on slicks and a fast track. So I was happy that it started to rain more on the warm-up lap. From that point I knew I had the pace.”

“I made a good start and tried to go but Marc came with me,” he continued. “I could hear him, tried the maximum and set very good lap times but it was very difficult to take an advantage.

“So I thought it would go down to the last lap with Marc again, which is always very difficult!” 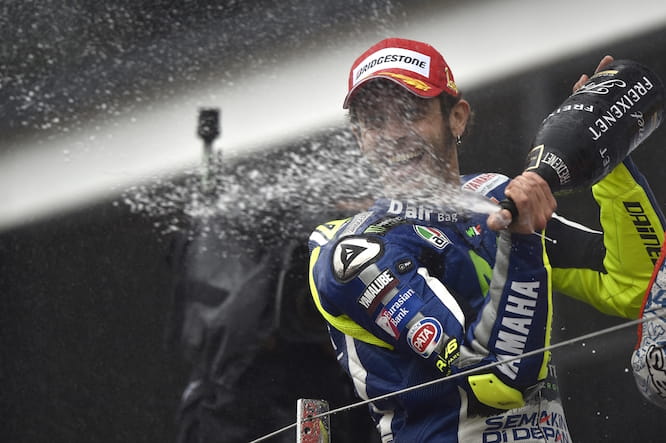 The race wouldn’t go down to the last lap though, as Marquez crashed out of contention at turn one on the 13th lap.

“I saw him in the gravel on the big screen and I couldn't hear him behind me, so I relaxed. I expected to have eight-seconds of advantage over Petrucci, but when I crossed the line I had just four seconds. I thought 'hummm, ok'. Then the next lap, three seconds.”

“My mistake was that I relaxed for one lap, because I thought I had more of an advantage. Also I didn't want to throw everything away and it started to rain more.”

Petrucci managed to close Rossi’s gap to 1.6 seconds before the nine times world champion broke him, forcing the Pramac Ducati star to settle for second place.

“But this is MotoGP - you can never relax: In every situation, in every practice, people want to beat you,” continued Rossi.

“I did the calculation and with five laps still to go Danilo could beat me. So I had to restart and push again. It was a crucial moment and also I think Danilo didn't want to throw away the first podium of his career. So I stayed concentrated, the bike helped me a lot and afterwards I saw he gave up on the win.

“I'm very happy and proud of this victory, it's a great feeling! I think that the last race in the wet that I won was ten years ago," said Rossi. “This victory is so important because sincerely speaking in the dry I think it was difficult to arrive in front of Jorge.”

The result means Rossi jumps back into the championship lead with a 12 point advantage over Jorge Lorenzo. Marquez’ crash means he sits 77 points behind the Italian and pretty much out of the title chase.

“It is important for sure to remain on top. Because I have been first from the first race and Jorge was one point behind me after Barcelona. Then he go down, then he arrived equal with me after Brno. But never in front. Never one point in front.

“So to re-open the gap is fantastic also because on paper this is a track where Jorge can beat me. But just this. Twelve points, six races to go and a lot of tracks where Jorge is very, very, very strong. So it is very open.”

“I think it is more important with Marquez because with this zero he is not finished [in the title fight], but now he is very far,” Rossi said. “This is very important to have a big advantage on Marquez. But in the case of Jorge it is just twelve points.”