Redding set for Pramac Ducati switch as Kent opts out

Scott Redding could be set for a shock switch to the Pramac Ducati team for the 2016 MotoGP season.

The British rider has struggled aboard Honda’s RC213V this year with the Marc VDS team and is keen to try something different for 2016.

Rumours linking Redding to the Pramac outfit surfaced during the last round at Brno, but Moto3 championship leader Danny Kent was thought to be favourite to take the seat.

Pramac boss Franceso Guidotti confirmed that he’d offered Kent a ‘long-term’ deal to step up to MotoGP with Ducati and that it was now up to Kent to decide whether he’d accept.

However, according to Bike Social sources, Kent is thought to have turned down Guidotti’s offer and is considering other options.

This would leave Redding in pole position for the final Desmosedici GP15 up for grabs next season, but he says nothing is sorted yet.

“I just want to do the best thing for my future,” Redding told Bike Social. “I’m in a sticky situation and I want to make the right decision.” 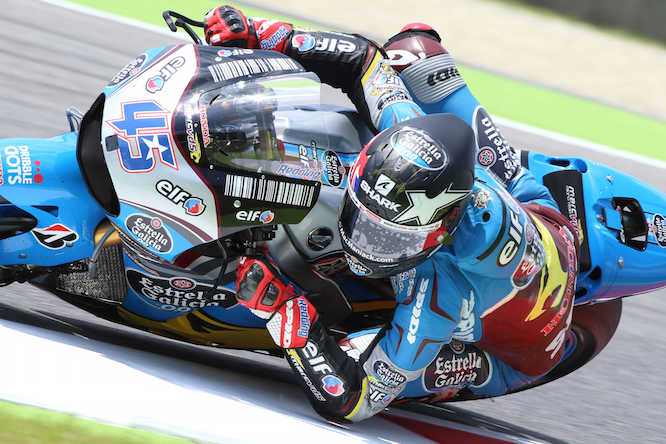 “We’re hoping to have it sorted over the next few races, hopefully we can make the decision at Silverstone this weekend.”

Redding thought his dreams had come true when he signed to ride the RC213V, thought to be one of the best bikes in the world, but things haven’t gone to plan for the 22-year-old.

“Everyone on the Honda has said the bike is really hard to ride. Cal’s said it, Marc has said it and he’s even said this year is worse than the past. I don’t know any difference but it it’s not easy to ride. Marquez has gone back to the 2014 chassis and the results then came for him, before that he even struggled to finish!”

Redding has experience with the Pramac team having tested with them in 2012, when he’s thought to have lapped faster than current Ducati factory rider Andrea Iannone.

“The test was good, we weren’t doing blistering lap times but the bike was a lot different back then. It’s a completely new bike now, much better if you listen to what the riders are saying.”

Despite all the talk, Redding is adamant nothing has been signed and says he still has the option to remain with the Marc VDS team.

“When a decision is made, it will be for the best reasons. If we stay with Honda, and I can make the results, then it’s great but if I can’t I’m in a really bad situation.

“It’s 50/50 at the moment to what we’ll do. The MarcVDS team and Marc van der Straten himself have put a lot of money, time and effort in to me and they definitely want me to do well, there’s no doubt about that. It’s a tough decision to make and I want to make the right call.”

Should Redding make the switch to Ducati, Tito Rabat looks likely to move into the seat left vacant by the Brit at Marc VDS.

An announcement regarding Redding's future could come as early as Misano.