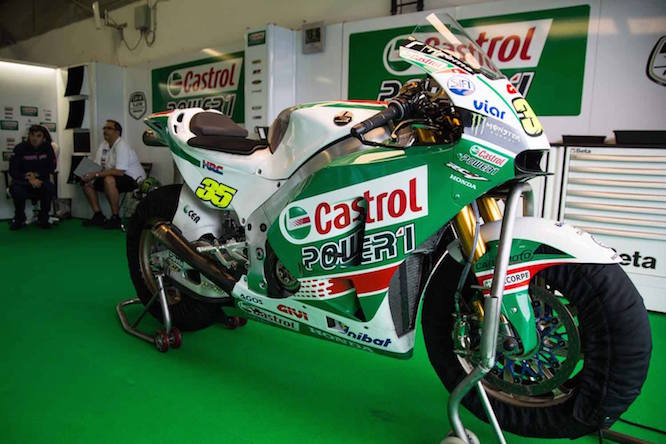 Crutchlow has been out on track this morning with his RC213V adorned in Castrol Power 1 colours instead of the CWM Rewards livery he’s run since the start of the season.

The London-based firm has proved to be a somewhat controversial sponsor since becoming involved with the LCR team at the 2014 British Grand Prix.

Earlier this year CWM’s offices were raided by police and 13 people, including owner Anthony Constantinou, were arrested on suspicion of fraud by false representation and money laundering.

Following the arrests, CWM’s foreign exchange firm, CWM FX, which was the title sponsor of the LCR Team, ceased to exist.

At the second round in Austin, the CWM FX logos were replaced with ‘CWM Rewards’, which has remained on the bike since then. Until now.

As well as the Castrol Power 1-liveried bike, the team’s pit box has also been re-branded but team boss Lucio Cechinello claims it’s all for a promotional video.

“It is a new livery, but we are making a commercial video for our sponsor Castrol,” said the Italian. “That’s why we didn’t make a statement about this livery.”

However, with all of the team’s other existing sponsors still present on the bike, there could be more to it than that.

Rumour in the paddock this weekend was that CWM has allegedly missed the latest instalment of their sponsorship fee, and Cechninello admits they need to talk about the future.

“From a contract point of view at this moment we are still linked with our current sponsor and we need to meet them and decide the future,” he concluded.

Cechinello wouldn’t say which livery the team would be running at the British Grand Prix next weekend at Silverstone.

Crutchlow crashed out of a top ten finish in the closing stages of this weekend's Czech Grand Prix. "We weren't feeling comfortable with our package all weekend," he said. "We tried hard to improve it but even in the race I had a lot of difficulty trying to maintain the pace."