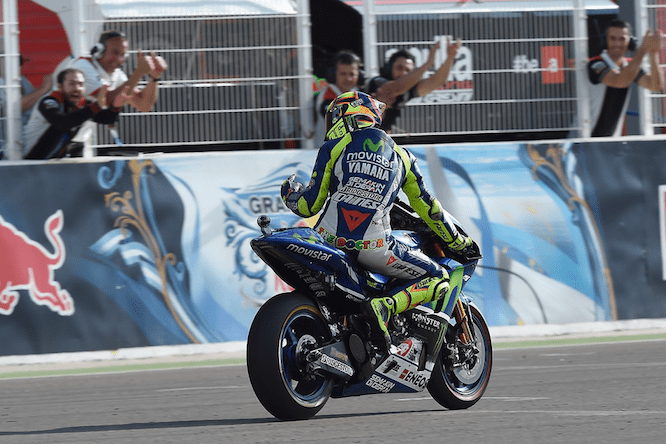 Valentino Rossi has said he is ‘disappointed’ Marc Marquez crashed out of Sunday’s MotoGP race as he’d have enjoyed battling until the end.

The nine-times World Champion took his second victory of the season after chasing down the Repsol Honda man before the pair came together on the penultimate lap with Marquez crashing out.

“This year we are very competitive, everywhere,” said Rossi after the race. “In the three races so far we have already had three podiums and two victories. We knew we would struggle in Austin but in Argentina on paper the track is better for the M1, but in practice we were struggling. We had to demonstrate we were stronger but in the race it was not so bad.

“Marc had a little more than 4 seconds lead but I had to try as I felt good. I arrived to Marc and I had six or seven tenths advantage in pace. I arrived very fast but I knew Marc would try something to stay in front. He touched me on the centre of the corner; he put the bike in to me. I thought ‘you’re aggressive!’

“When I opened the throttle and tried to accelerate I heard another touch but I wasn’t sure where he’d hit me. When I crossed the line I saw my advantage was to Dovi so I knew something had happened.

“I’m disappointed with his crash because for sure it would have been a great battle until the end.

“For me this is one of the best, because after the bad start we recovered a lot. My bike was fantastic. The bike was moving everywhere but I didn’t give up!”

Rossi now leads the world standing by six points ahead of Andrea Dovizioso, with Marquez down in fifth some 33 points off the Movistar Yamaha man.

The season resumes in just over a week’s time in Jerez.