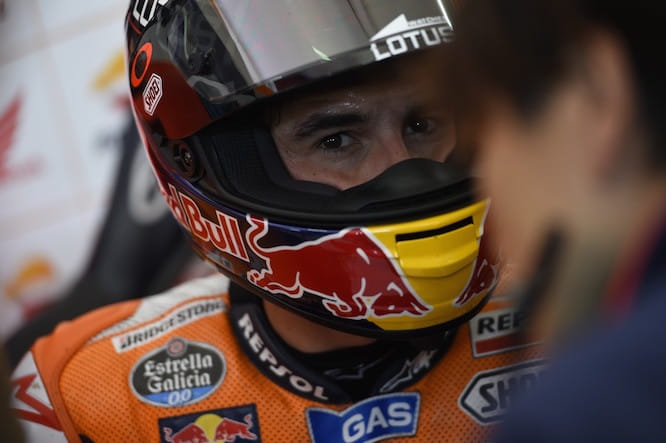 Marc Marquez has shrugged off the crash which ruled him out of the final stages of this weekend’s Argentinian Grand Prix.

The Repsol Honda rider had built a strong lead in the first part of the race, but riding on the softer option tyre his rear Bridgestone began to delaminate in the closing stages allowing Yamaha’s Valentino Rossi to close him down.

Relentless as ever, Marquez refused to let the Italian past, fighting hard to remain in front. This lead to the pair colliding, before Marquez ran into the back of Rossi’s M1 and dramatically crashed out of the race.

“Valentino was coming really, really strong,” said Marquez after the race. “We had used the softer tyre for the race and in the beginning we opened a gap but in the end he managed to catch me. On the braking point in the back straight he over took me and after that everything happened, but this is racing, these things happen!

"The tyre strategy was working out well for us – it’s just a pity about the last two laps. When I saw that he was closing in on me, I decided to conserve the tyres a little. On the final laps I went back to riding in the low 1'39s to check that the tyres were still in good shape, and knew that we would be fighting to the end. When he caught me, we fought for a few corners and unfortunately we touched and I crashed. I've always said that he's my idol and my reference, so you always learn things from him."

The Spaniard suffered friction burn to the rear side of his leg in the incident. He now trails Rossi in the standings by 30 points after just three rounds.