Marquez: 'The last lap was so exciting!' 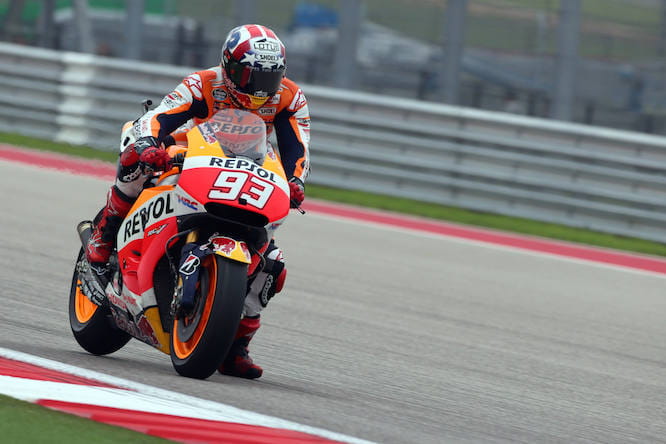 Marc Marquez has said there was 100% adrenaline behind his pole position lap in Austin after having to swap bikes with just three minutes remaining.

After a few issues getting the bike started, Marquez came across the line for the first flying lap of his second stint in Q2 to see a warning light on the dashboard of his Honda RC213V. Fortunately for Marquez, the light came on as he was heading down the start finish straight, allowing him to immediately switch off the machine, lean it against pit wall, hop over and run to get his second bike.

Literally the last man on track to set a lap, the Spaniard was visibly on the limit as he looked to make amends and that he did, storming to pole position by 0.3 seconds, shattering his own outright lap record from 2014.

“This one was different and it was so exciting on the last lap, the adrenaline was 100% but the most important thing was that we got the pole and it doesn't matter how,” Marquez said after the session.

“Tomorrow it will be important to be focused and this pole has given me good confidence. In dry conditions we are ready to fight for the victory, the question mark is in wet conditions but you never know what will happen. In the last lap I was pushing 100 per-cent and like you saw there was a big moment on the kerb; I tried to open more gas and I nearly crashed and lost some tenths, but on the last lap always you push 100%. After what happened it was difficult to find the best line with my concentration but in the end the lap was really good.

“When I saw the warning I stopped the bike and I ran to get the second bike and the mechanics did a really good job because they prepared the second bike really quick. Okay the set-up was not like the last one but it doesn't matter because the bike was ready and from seventh position we got the pole position and it was important to be on the front row. At least if [the race] is in wet conditions the positive thing is that we have already tested the tyres ad the set-up of the bike. It will be a tough race for sure in the rain but we will cross our fingers for a dry day.”