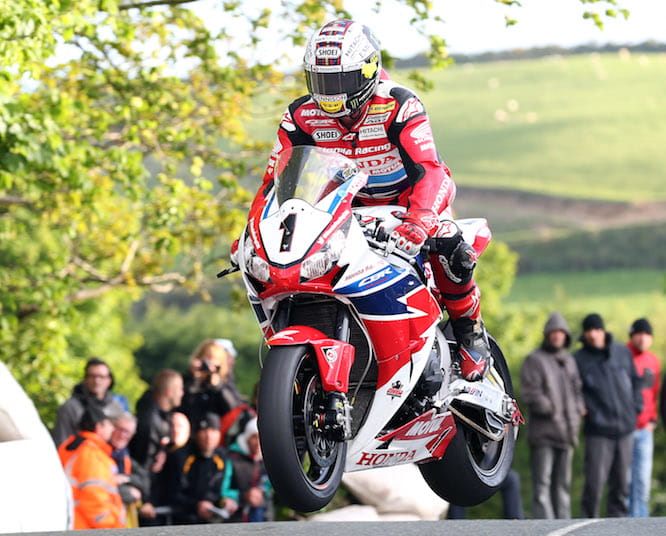 John McGuinness stormed to a dominant 23rd Isle of Man TT victory in this afternoon’s Senior TT, becoming one of the most successful riders ever in the blue riband race.

The result sees McGuinness match Mike Hailwood in having seven Senior TT victories and silences doubters after a tough week at this year's event.

The Morecambe Missile bolted out of the blocks on the first lap but it was Ian Hutchinson who led as they completed their first lap. However, a red flag for an incident involving Jamie Hamilton saw the race brought to a stop on the second lap as the leaders passed through Ramsey.

McGuinness was on a mission as the race restarted just over an hour later over a four lap distance. The Honda Racing man shattered the Senior lap record from a standing start on the first lap to place ahead pre-race favourite Hutchinson.

McGuinness' charge didn't end there, he went on to shatter the outright lap record on the second lap with an average speed of 132.701mph. A moment for Hutchinson at signpost saw McGuinness lead the race by some 12 seconds into the pitstops.

Meticulous as ever, McGuinness continued to build his gap leading by an impressive 17 seconds over the line on lap three - the biggest gap in any race throughout the 2015 TT.

Hutchinson's Senior woes continued on the final lap as James Hillier moved past into second place. Guy Martin, who managed to join the elite 132mph club on lap 2, took fourth ahead of the injured Michael Dunlop in fifth. McGuinness' Honda Racing teammate, Conor Cummins rounded out the top six.