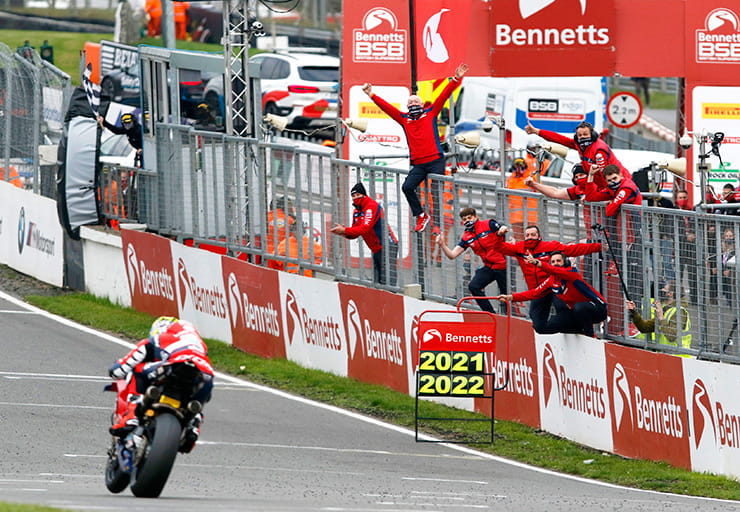 Cementing its place as the longest running title sponsor of the British Superbike championship, Bennetts - the motorcycle insurance specialist - has confirmed its contract extension by a further two years through to the end of the 2022 season after agreeing a new deal with series promoter MotorSport Vision Racing (MSVR).

Having supported the greatest national championship in the world from 2005 – 2008, Bennetts returned as title sponsor again in 2018 with championship wins during this latter period going to Leon Haslam, Scott Redding and then, in 2020, Josh Brookes.

Following the shortened 2020 Bennetts British Superbike season, the championship starts again in May at Oulton Park with 11 rounds of three races each, meaning the title will be fought out over 33 races. There’s a change to the Showdown too with eight who’ll make it through after 24 of the 33 races, leaving the final 9 races as the title deciders with the championship trophy being presented after the final race at Brands Hatch on October 15th -17th.

Fans at every venue across the 11 championship rounds will be able to engage with Bennetts in a variety of exciting ways as well as the brand benefitting from huge exposure from the extensive live and highlights coverage shown on Eurosport and the free to air Quest channels.

Bennetts Rewards members will also be able to get closer to the action than ever before, with the chance to win exclusive access at the races – including grid walks, safety car and pillion laps, presenting trophies and attending post-race press conferences – along with other events and competition opportunities throughout each season.

Managing Director of Bennetts, Vince Chaney, said: “It made perfect sense for Bennetts to continue its association with MSVR and the British Superbike championship. The partnership provides Bennetts with an exciting opportunity to really be at the heart of a huge community of motorcyclists and motorcycle fans while simultaneously supporting British motorcycle racing.

“With Bennetts Rewards, we have a unique proposition available to all riders and racing fans and we will work closely with BSB to create incredible experiences and exclusive opportunities so our Rewards members can help get more from motorcycling.”

Bennetts BSB Series Director, Stuart Higgs, commented: “Naturally, we are very happy to reach a new deal with Bennetts: it really is a partnership between MSVR and Bennetts and the plans for 2021 and 2022 are incredibly exciting as, together, we will introduce new ways to help engage with riders and race fans. This new agreement makes Bennetts the most dedicated title sponsor in the series’ 25-year history and there are more announcements coming to show how this relationship will develop for the coming seasons.”

Tickets can be purchased at www.britishsuperbike.com and race fans can also enjoy BSB radio and live timing using the official Bennetts BSB app.