BSB | Xavi Fores on Knockhill results: “I’d never seen the track before and it’s the kind that isn’t easy for our bike” 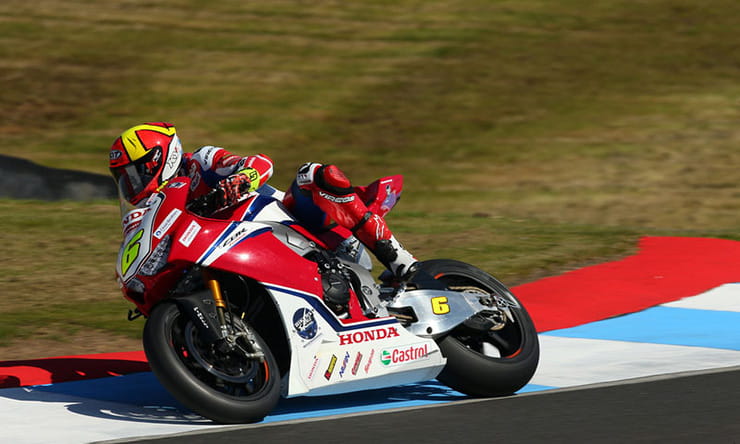 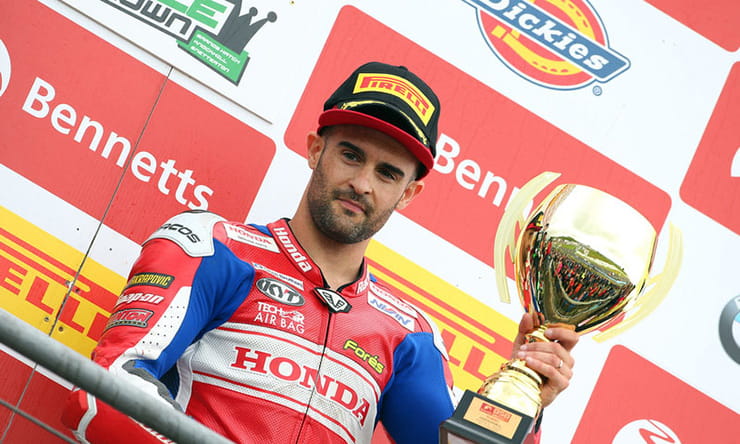 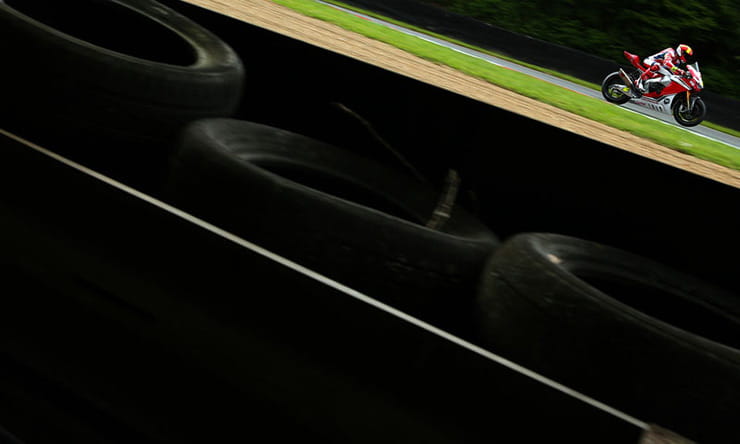 Honda Racing’s Xavi Fores once again demonstrated his world class level of riding to the Bennetts British Superbike paddock at Knockhill with his third podium of the season after securing his maiden pole position in the pouring rain on Saturday.

The Spaniard once again looked a forced to be reckoned with and is quickly becoming one man that shouldn’t be discounted in this year’s fight for the Showdown after another solid points haul saw him solidify his place in the top six.

However, the likeable and always smiling Valencian revealed to BikeSocial that his success in 2019 has come somewhat of a shock, and a surprise, to the former World Superbike star who admitted he felt he would struggle in his debut year in the British Superbike paddock.

“Honestly I expected to struggle quite a lot. I struggled a lot at Brands Hatch and Oulton Park, but at Donington I was able to stay strong and get on the podium, and at Knockhill.

“We are going to Snetterton and the guys are saying to me it’s fluid, and it will be easier for me and also for my bike so hopefully we can enjoy these kind of tracks. 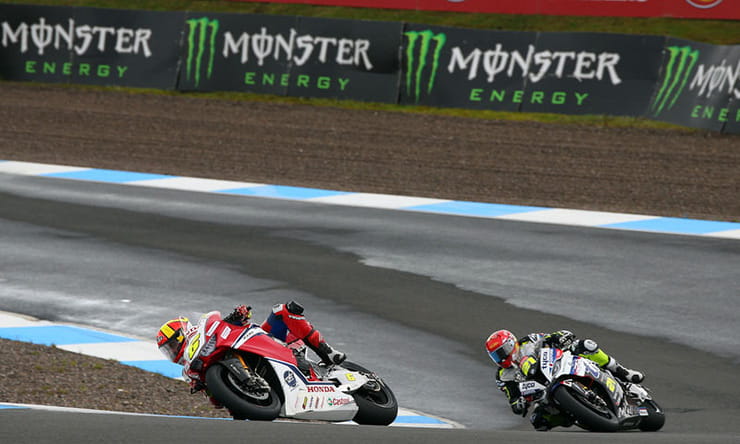 Above: Fores battled it out with Christian Iddon in Sunday’s first race

“We’ll need to be strong and that is important in order to stay in the Showdown. I’m unsure who is behind me, but I know that the Championship standings is very close from me to the top ten, so we can’t make any mistake and we have to bring home points at every race.”

Fores walked away from Scotland with a third place in the opening encounter, which was run in mixed conditions on a drying track, and an eleventh-place finish in race two was enough to continue his strong form.

But after not testing at the tight and twisty 1.2-mile Knockhill before the race weekend, nobody expected the Honda Racing man to be at the sharp end in qualifying and both races, and even Fores himself admitted the podium was a pleasant surprise.

“I’m quite happy and to be honest it’s something unexpected, but especially coming here I didn’t expect to be on the pole position in the wet conditions, and to get a podium in race one.

“We are chipping away, trying to find something on the bike, and trying to improve our bike.

“It’s not an easy bike but the results are coming, me and Andrew are working in the same direction so it’s getting better and better and hopefully it’s going to be a strong second half of the Championship for us. 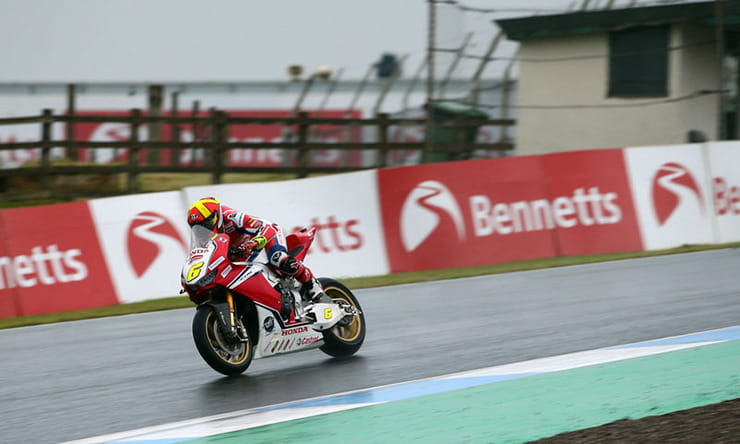 Above: No matter what the weather Fores was the main man in Scotland

“I was really surprised, because I’d never seen the track before and it’s a kind of track that isn’t easy for our bike.

“We started from Friday trying to change the bike quite a lot in order to stay closer to the front guys. And especially on Saturday morning we found something extra on the bike that helped me, and Andrew, go a little stronger and we closed the gap a lot to the pole position.

“Honestly, it’s the way we have to go, everything is a completely new to me, the bike, the team, the tracks so I have to learn many, many things during the weekends so to be on the podium is fantastic.”

The past few seasons have been a challenge for the Honda Racing team, after the introduction of the new Fireblade in 2017 results have often been hard to come by for the Lincolnshire-based squad.

But with two new riders for 2019, after parting ways with Jason O’Halloran and Dan Linfoot in the winter, the fresh rider line-up has seen new ideas brought to the table by Fores and youngster Andrew Irwin. 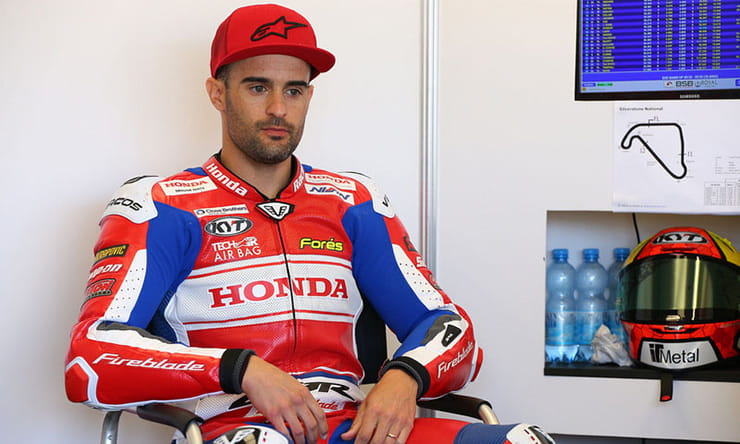 Above: Fores now has three podiums in 2019

The new ideas have since helped the team to three podiums already this current campaign from Fores, with Irwin consistently picking up in every race.

Fores went on to explain exactly what has changed with the Fireblade for 2019, and why he and Irwin are working hard away from the track to improve what is a tricky motorcycle to race.

“The team were working on the bike in the past few years in a completely different direction.

“Because it is a machine that flexes a lot and we have to keep the movements on the bike a little bit calmer.

“So, this is something that I have been thinking a lot about, even at home, watching all the videos so we have made a big step forward at Knockhill and hopefully at Snetterton it will be a little bit better.”

Not only has it been all change for Fores this year in terms of a new bike, but he has a new team, new tracks to learn and surroundings to acclimatise too. But this season he a team mate to work alongside. 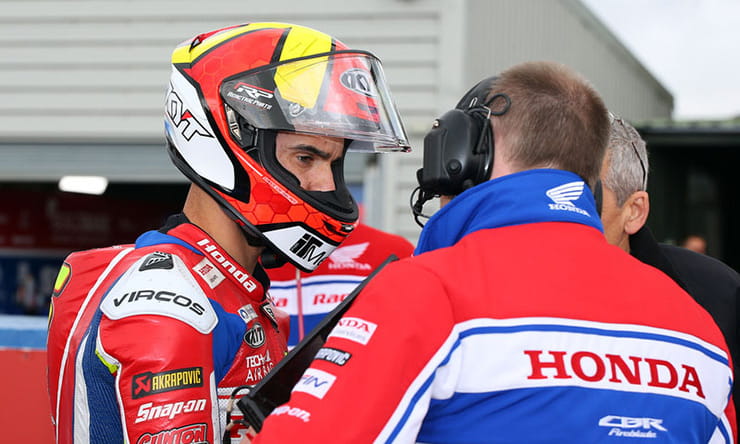 Above: Honda Racing is more than just a motorcycle racing team

For the last few years Fores has been a one-man band in World Superbikes with the Barni Racing Ducati squad, working on his own in a small team.

But he admitted he’s enjoying the challenge of working with a second rider, bouncing information off Irwin and helping him develop on, and off the bike.

“Honestly I’m working on my direction and Andrew is just working in the same direction as me. I have a good experience in setting up bikes and if I can help him improve his package for us both on the bike then I will like to do it, because we are working for the team.

“We are trying to be strong at the end of the year, our target is to be in the showdown so if we can help each other it will be easier for the both of us.”

A run of brand-new tracks is on its way for the Spaniard with the likes of Snetterton, Thruxton and Cadwell Park on the horizon, but with the way the 34-year-old is riding now it wouldn’t be a surprise if he walked away with trophies from them all.